Penultimate Day   Top of the World

We have been making very good progress and will hopefully get to the pole (tomorrow) a day early including making up for the lost day at the beginning. This will also be in time for Osuuku's birthday at the pole - although we have not been able to bring much drink with us as you need a boarding pass to buy any in Longyearbyen.

We are very close to the international date line now and it is quite amusing to think that a few hundred metres that way lies yesterday. I think that Douglas Adams would have enjoyed the space / time conundrum possibilities arising from that thought - and the ability to travel through time zones when you get close to the pole.

All going well until we come to a wide lead with ice too fresh to cross. We follow it for a while and come across some tracks going in (and coming out the other side!) but these are from a day or two ago when the led was narrower and the ice more solid. We then follow it for another couple of km but there is no sign of it narrowing. We find a large chunk of ice in the middle and contemplate whether we can use this or not.

Eventually we have a plan to step onto it over the short gap on our side and then jump over the longer gap on the far side and then fill in that larger gap with the large chunks of ice on the far side - our fearless leader Keith and I are the keenest to go. He goes first and lands majestically / in a heap on the far side. I go to jump and just as I do, the part I am standing on crumbles and my jump doesn't take me quite as far as I anticipated and so land on the very edge of the far side. This doesn't take my weight and I slide into the water up to my waist before scrambling out. Bloody global warming!!

But the damage is done, both to our plan (as the ice block isn't stable enough) and to my boots which are now full of water. I jump back onto the block and then back to the original side to whip of my boots and socks and put on new socks and boot liners before my feet freeze. In fact, and with significant thanks to Keith again for the assistance, in no time at all my feet are dry and warm and I am ready to travel again. Most fun of the trip so far!!

Below is how one of my trip mates described the event - see his updates for some amusing commentary on the expedition (Carl Roland's NP diary).

"Luckily the incident today with Sebastian falling through the ice turned out OK, thanks to him being so tough!!! We had to cross a number of ice bergs today. One of the bergs collapsed under Sebastian and he went through the ice. He was submerged about three quarters before he managed to get out. We had to roll him around in the snow to help him get dry...which sounds pretty bizarre, but actually it is the best thing to do because the snow is "dry" here in the North Pole and this helps to soak up all the wet. We replaced Sebastian's boot liners with a spare pair of fresh dry liners to prevent his feet getting frost bite, and it was important to get him moving again as quickly as possible so that his body would generate heat and disperse all the moisture away from his body and dry out his clothing. Sebastian was up and trekking again in no time and it was business as usual for him - the guy is as hard as nails!"

We spend about another hour following the lead to find and get over a new crossing. But this is really not much of a crossing and we end up using a couple of the sleds to provide some added security!

From there it is another power hour or two to leave us just 6 miles south of the pole - very doable on the morrow. The main consequence of my little dip is that my socks and good boot liners are frozen solid. Much of the evening is spent trying to thaw and then dry these out.

Top of the World

Despite my best efforts, it has just been too cold and too damp in the tent to dry my liners properly but they are at least warm so I decide to chance them - they should be fine as long as we don't spend too much time standing around!
We make good time for the first few hours and then spot some tents up ahead. They seem too close to be at the pole or to have drifted away overnight but so near to it as to make no sense stopping there so something must be up. It turns out that one of the Chinese team was fiddling with their bindings whilst standing on a frozen over lead - not always the best of ideas! The inevitable happened and he too took a dip and so they had to stop to get him dry and warm. We greet the Chinese team and then shoot on for the last two nautical miles and get to the pole. It turns out to be a pretty comical finish as it is difficult to find an exact spot via GPS and so there was a good few minutes of walking in circles over a 10m squared patch of ice until the coordinates converged to cheers and photographs.

Very shortly after, and this is a matter of minutes, we started getting cold and then a couple of minutes later really cold and it only got worse whilst we put the tents up. This was a mixture of the temperature dropping down to -35c, a strong icy wind that had built up and the number of stops we had over the last hour or so. I tried to light our stove but needed to refill the fuel which was neither fun nor easy with my hands in such a state and managed to get a couple of ice burns for my troubles. It also took quite a time to get my boots off as given all the stops, my liners has started to freeze solid. Just a couple of examples of how tough things can suddenly get in this environment when you switch off!

Even once we were all in our tents it was still so cold that some people ended up getting into their sleeping bags. Finally, this and a hot dinner did the trick and some life came back to the camp and we went outside to celebrate when the Chinese team arrived - a crate with some wine and vodka had been dropped nearby by a helicopter from Barneo!

From then on it was back to our tent for Usukhu's birthday party and further celebrations with a wide range of drinks, music and conversations. Guy excelled yet again by whipping up pizza bagels and tortillas for everyone. We had the whole of our group and various guests in our tent which meant lying on top of each other but that just made it more convivial and perhaps more importantly warm!

A cracking night was had by all but judging by the state of our tent (I am impressed it is still standing given the number of less than graceful entrances and exits it suffered during the course of the evening) and the silence from the rest of the camp given that I am writing this at 10am on the morning after, today could be a low key affair. The team had in fact made an impressive go of circumventing the Longyearbyen alcohol restrictions and the airdropped booze was a godsend!

The plan is to head back to Barneo once the dog sled team arrives and then back to Longyearbyen if the plane is available or stay another night there if not and back tomorrow for our last night before heading home.
We take a few photos on short forays from the warmth of the tents and play a bit of Frisbee

but the afternoon brings on the same cold spell as yesterday and we retreat to sleeping bags to keep warm.
The dog team finally come in at about 6pm and so the choppers are to come at about 8 to take us to Barneo. 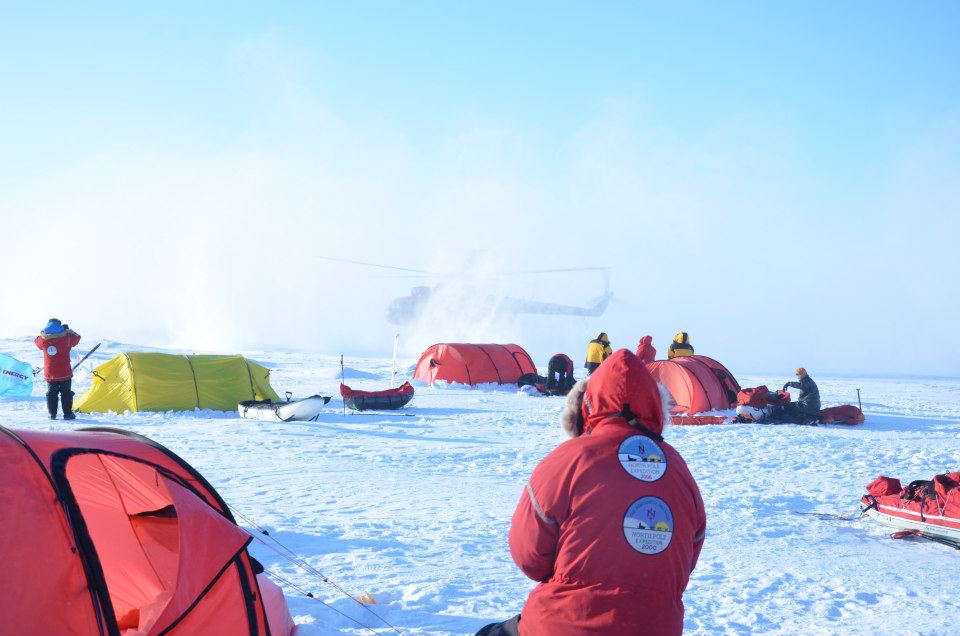 Good fun loading the chopper with the dogs and then sharing the cramped space with them again. All sorts of drinks being passed round on the trip back - especially Aquavit. It turns out that Barneo has been pretty much dismantled so no food, mess tent or sleeping tents await us. However, even though we are about 80miles from the pole it is significantly warmer here so spirits are raised which are furthered when we have a quick drink with the Russian pilots in the only tent remaining.

Obviously, next am a large storm has come in and although it is not that cold (only -25 or so) it is very windy so there is concern as to whether the plane will be able to land or not. However all the Russians are heading out today - quite a few will be on our plane - so they are almost certain to land and take off. Not too sure if that is a good thing!

Nevertheless we pack up to make sure that we are ready to go - especially if there is only a short weather window. The wind has abated a bit by the time the plane comes in and many of us lend a hand to the packing effort of getting 20 sledges, 3 large dog sleds, 18 dogs and a whole heap of Barneo kit into the plane as quickly as possible. Almost typically, just as we have finished one of the Russians turns up with a tractor pulling a large amount of stuff which he wants loaded - a large row breaks out as he is both insistent and also unconcerned by the fact that the plane is already full. Eventually we are asked to get on and so it is not quite clear what happened...

There aren't enough seats on the planes but from somewhere a couple of camp chairs appear and then a few of Barneo staff join us in the back of the plane as the cockpit and tiny passage to the main door are full of people and gear. With all of this the crew don't even bother with the cursory and comical safety instructions as on the way up. Back to Longyearbyen for a last group meal and then off to the airport in the morning to catch flights home.