My super starts to expeditions continues but this time it is fully my fault.  My farewell lunch and drinks with the chaps is great fun but lasts a good 12 hours so I wake on Saturday morning in a pretty dazed state. Decision making and anything resembling competence are unobtainable and, despite having the whole day  to get myself ready, I am still late for the taxi - it doesn't help that a couple of bags of equipment have just disappeared so I am going to have to do some shopping at Heathrow and Kathmandu. I also have not been able to find my bag weighing tool so I am a bit concerned about issue at check-in. I get 30kg but that goes pretty quickly and so I have to make some difficult decisions over what to leave behind - nothing critical, just some things that could make the trip a lot more comfortable.

I am flying via Abu Dhabi which is trying to establish itself as an international hub but it appears to have a long way to go. The transfer hall has probably 1,000 people in it and very few people on the security stations. Some junior staff are trying to manage things but are completely overwhelmed by the number of people who have imminent flights and the fact that neither they nor many of the passengers speak much English (or any other common language). Very fortunately, it turns out that I am flying out of the old terminal and there is no queue to get there!

We have a group meeting over breakfast to discuss the next couple of days and complete our Chinese / Tibetan visa applications. I raise some oddities in the kit list for the acclimatisation trek and it turns out that a couple of key items (crampons!) have been omitted so some hasty repacking follows. Then it's off to Thamel for some remedial shopping - luckily I am not the only person making this trip!

We have a long drive out to the road head for our trek and the road is in a very poor state. We have to navigate potholes of varying sizes as well as herds of goats and cattle and have to get out of the bus a few times to lighten the load and allow the bus to get over some pretty big rocks in the road. 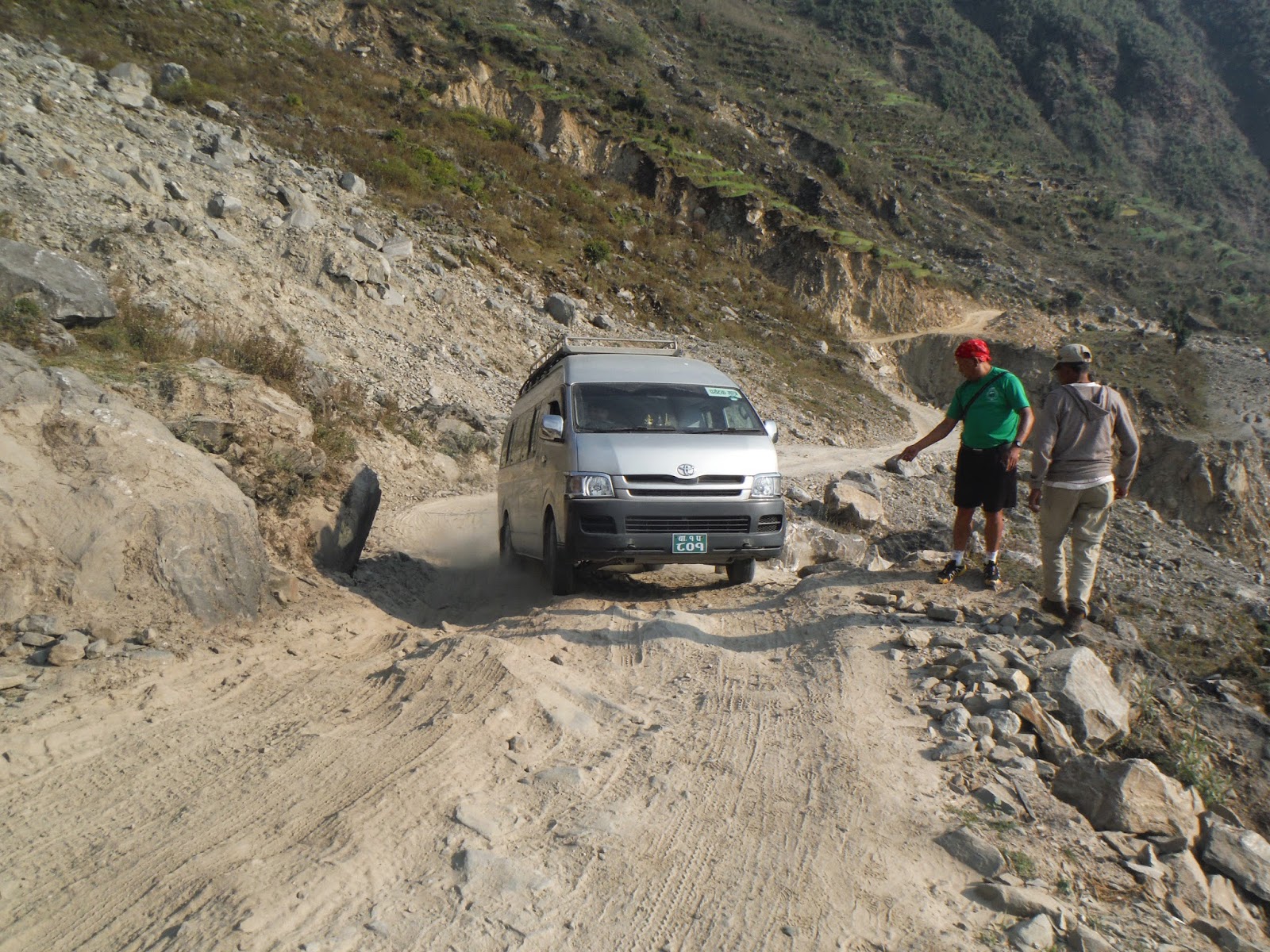 One of the many tricky sections of the road 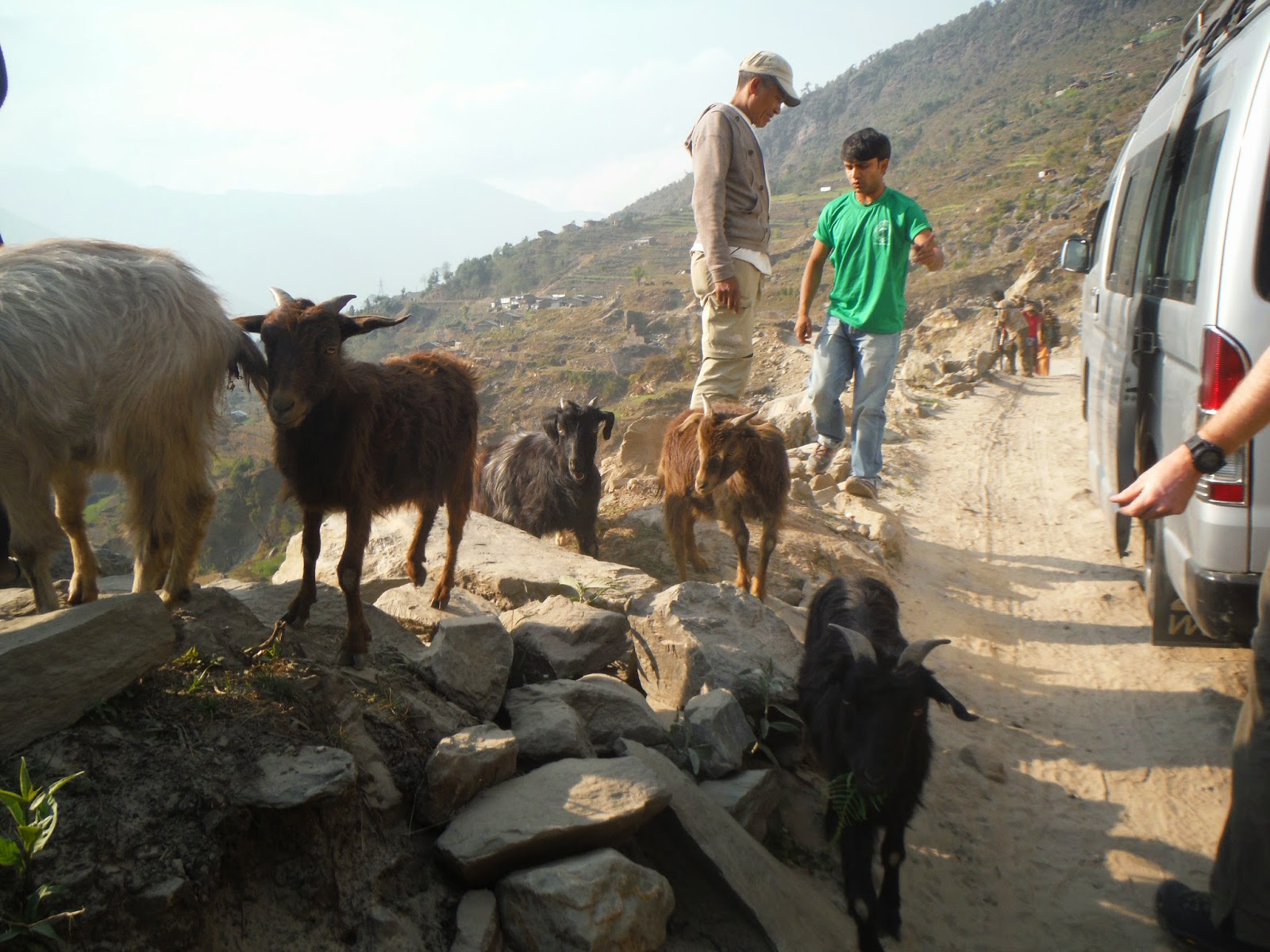 First some goats come past 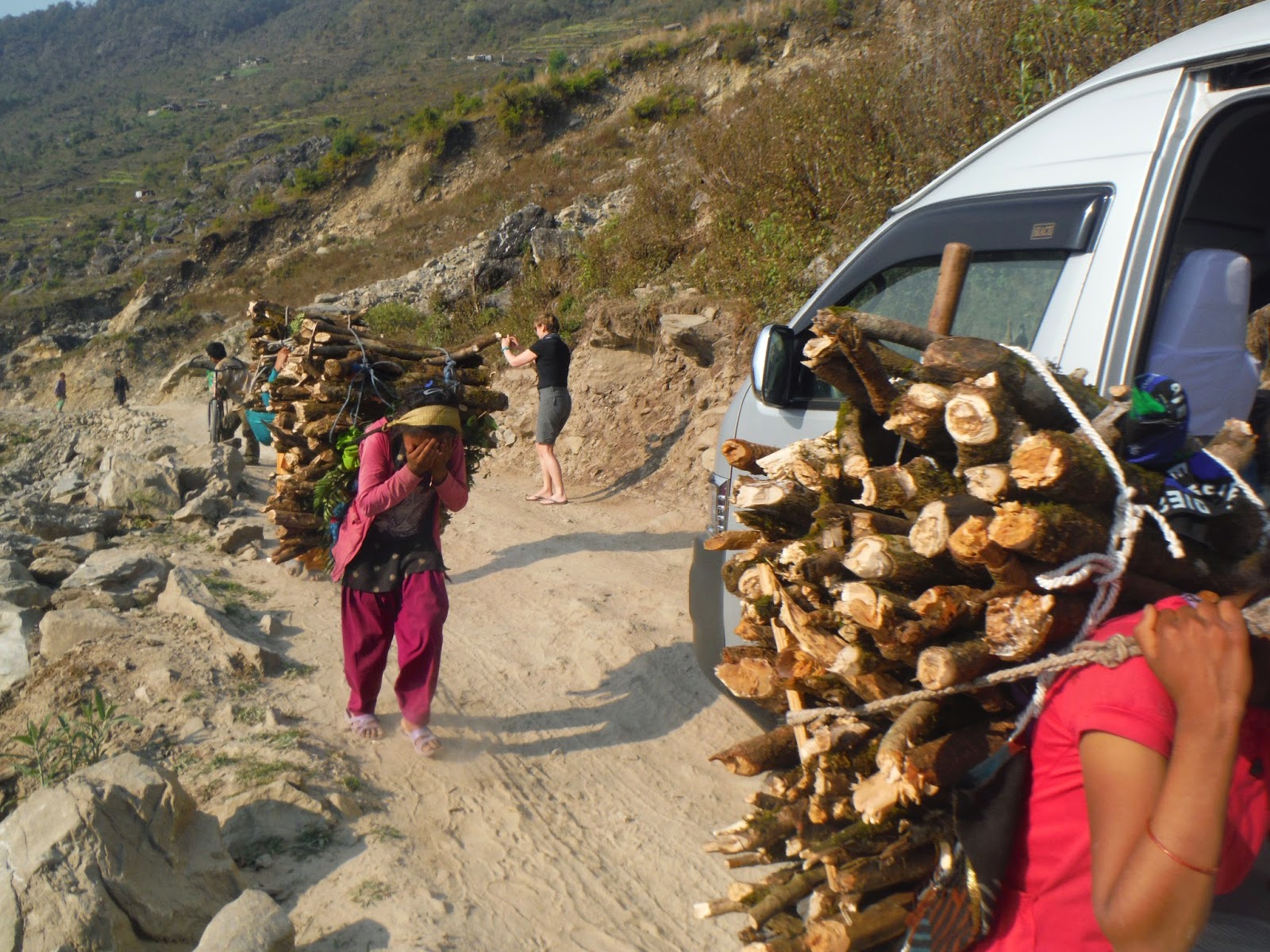 Then some women carrying firewood 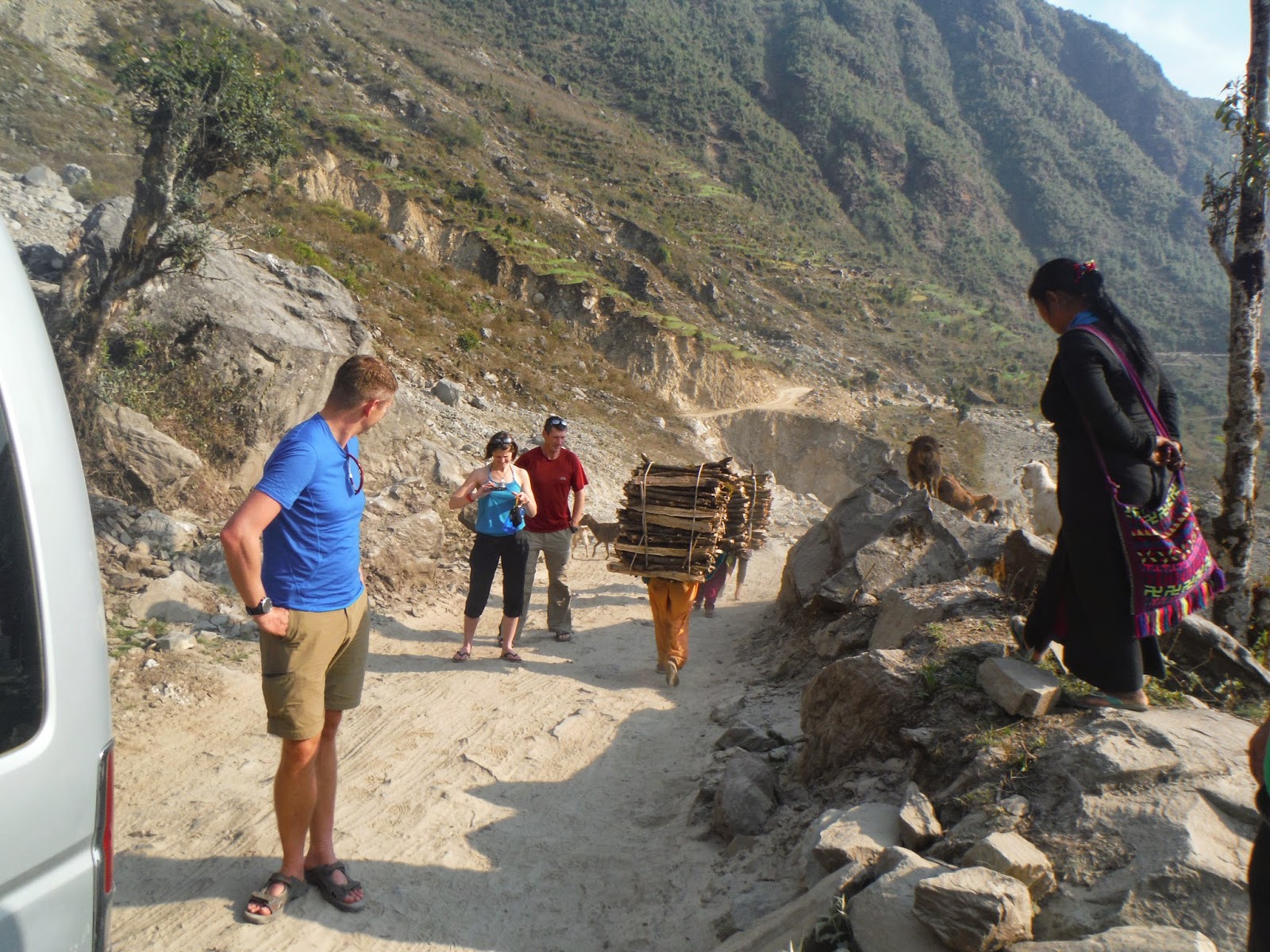 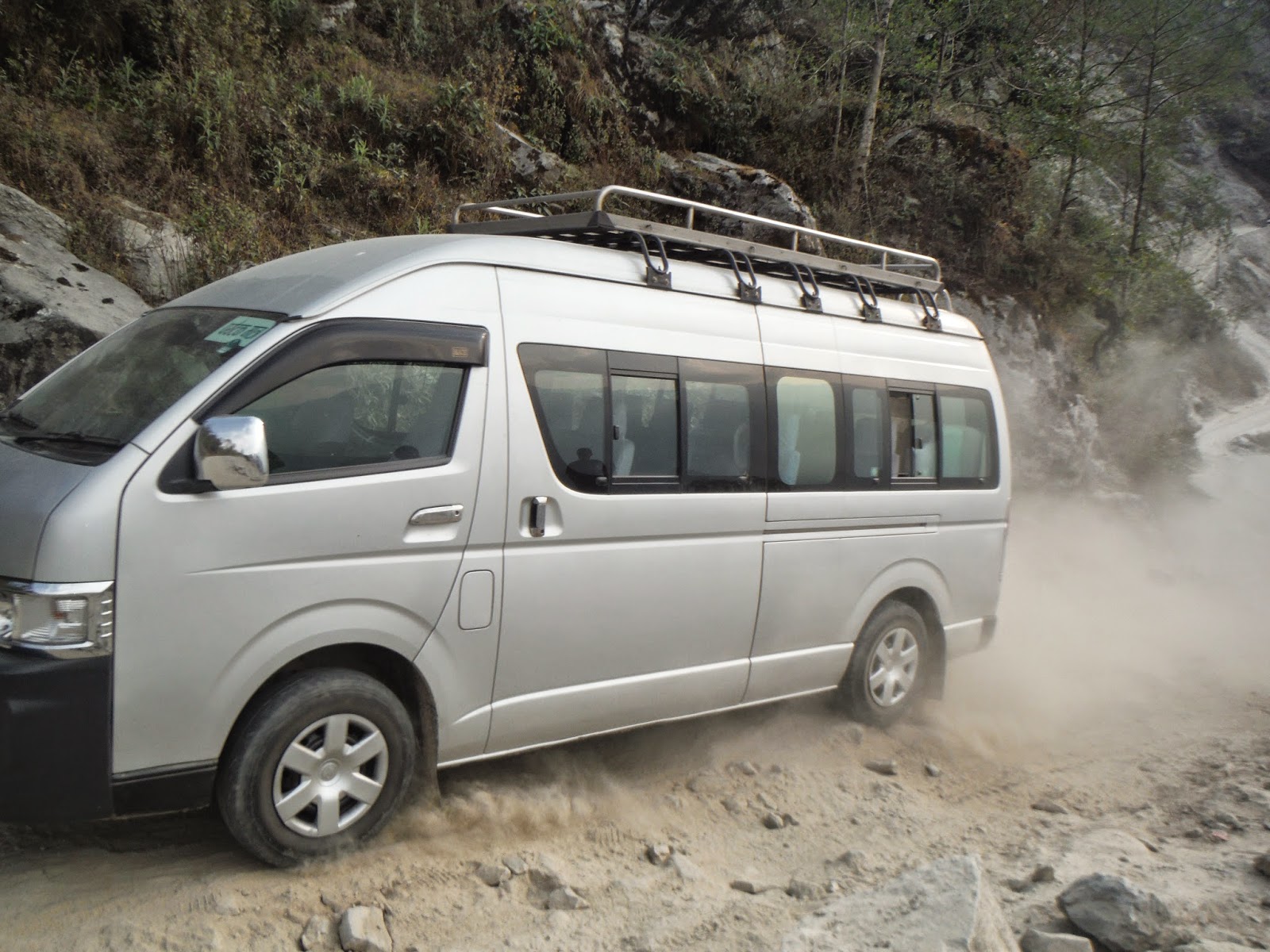 Finally the van makes a go for it

The bus has a video screen and we are shown The Secret Life of Walter Mitty - luckily I am still exhausted after the past few nights and sleep through most of it.

We get to the road head which is a small village on the road with a number of teahouses, shops and restaurants and then after an early dinner head to bed to be ready for an early start tomorrow. 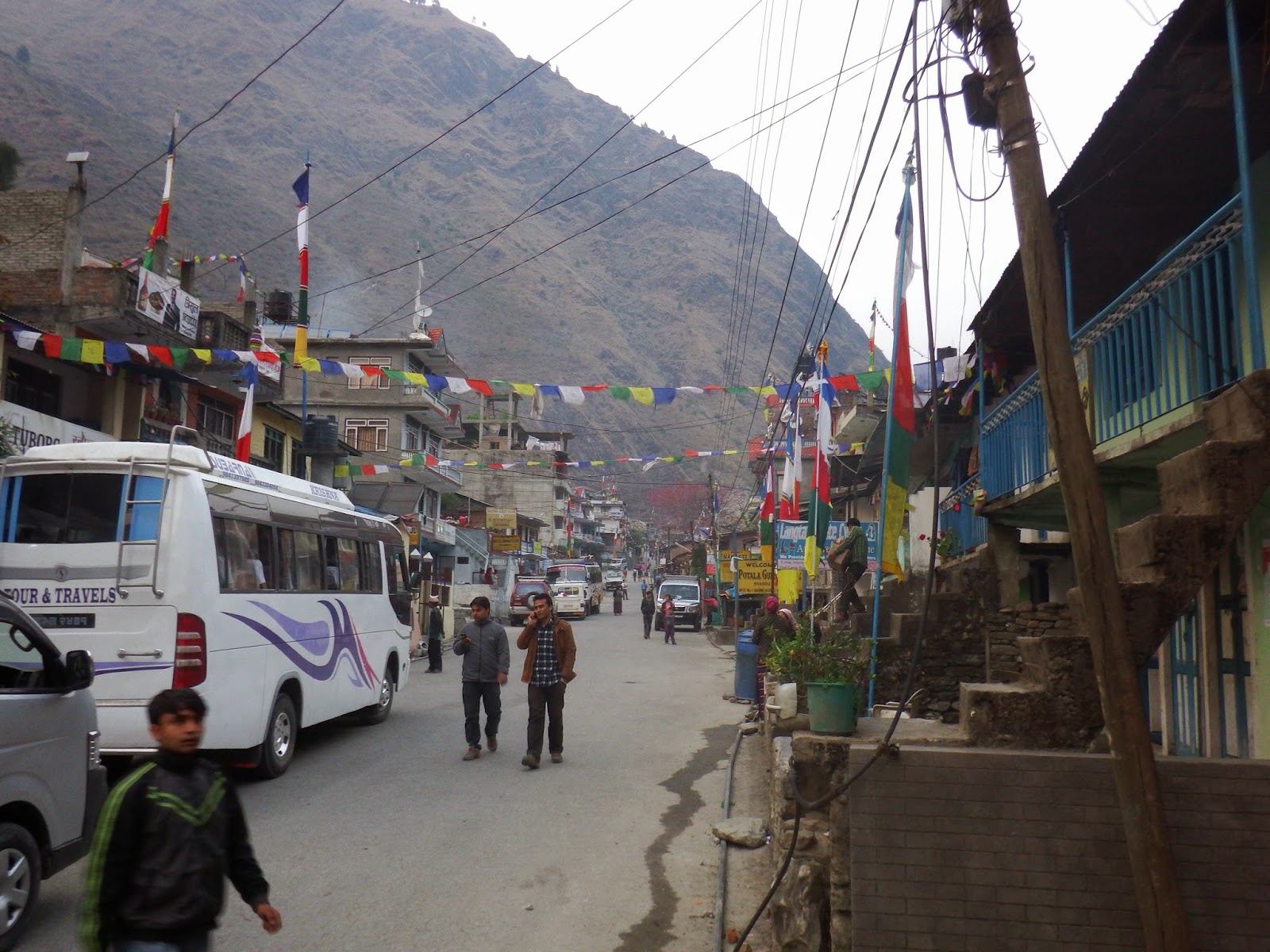 Up early to head up into the Langtang Valley. We are walking alongside the river all the way up the valley and it is fairly wooded as we start off. The trek is meant to be 5 hours today but that is probably at a very leisurely pace. 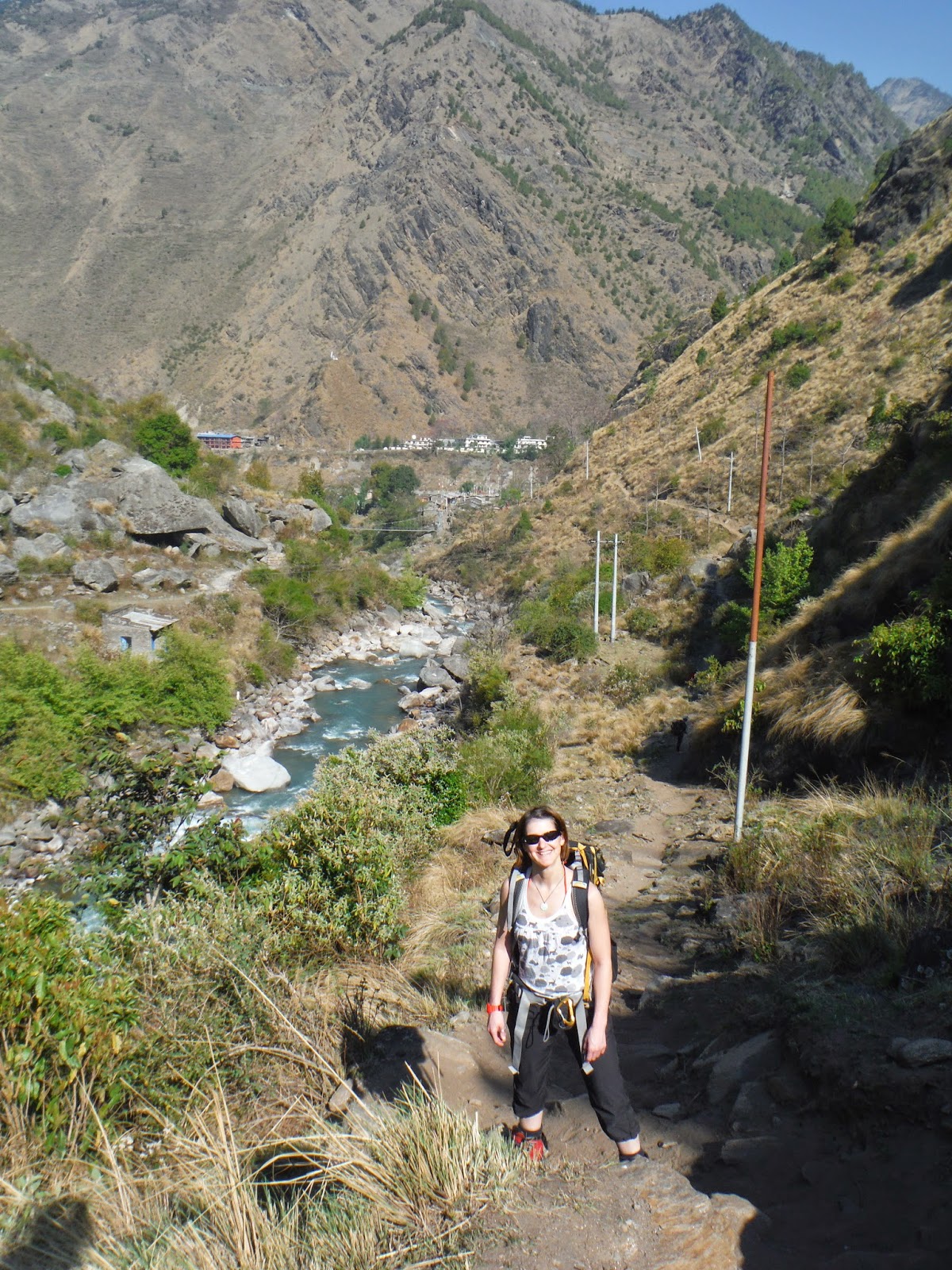 Walk up from the roadhead behind Sas 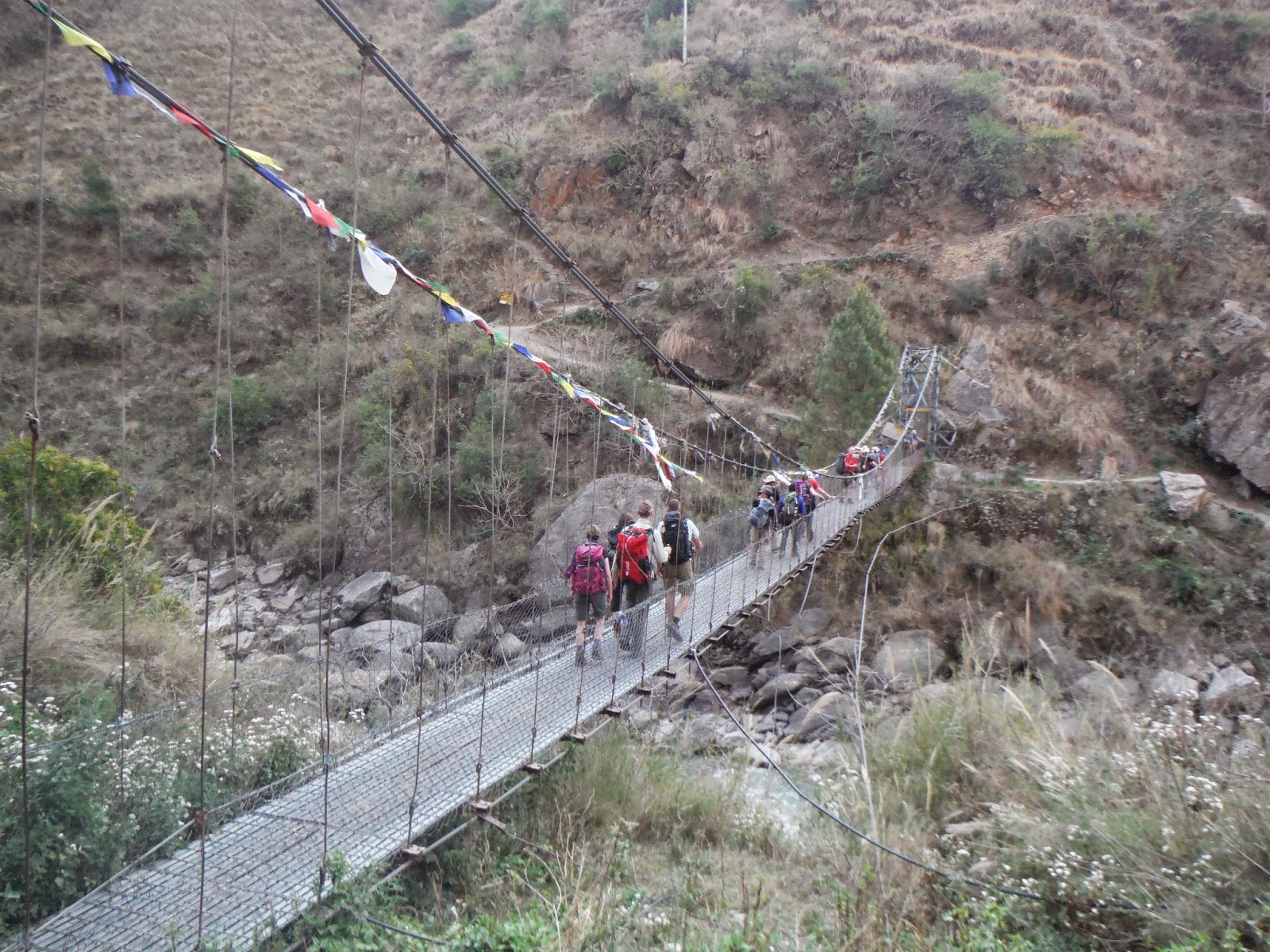 One of the many vertigo inducing bridges we have to cross

I have seen a few of these at the bottom of ravines so their safety is far from assured. I have to steel my mid as I approach each one and then try to think about something else as I cross as otherwise I get very giddy and nauseated.

We end up having a few breaks on the way up and then a two hour stop for lunch so we actually take quite a bit longer overall. 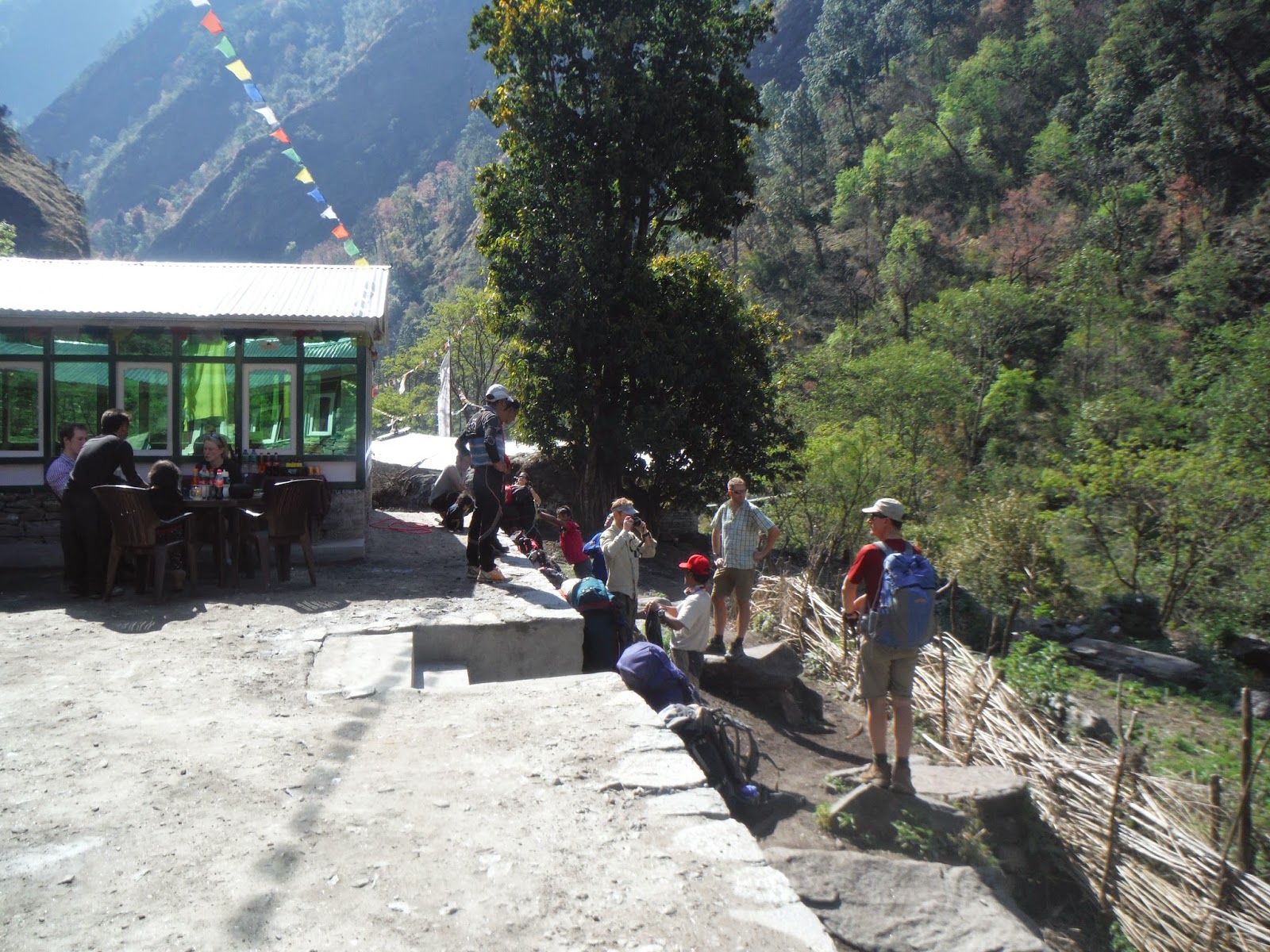 The first of many breaks 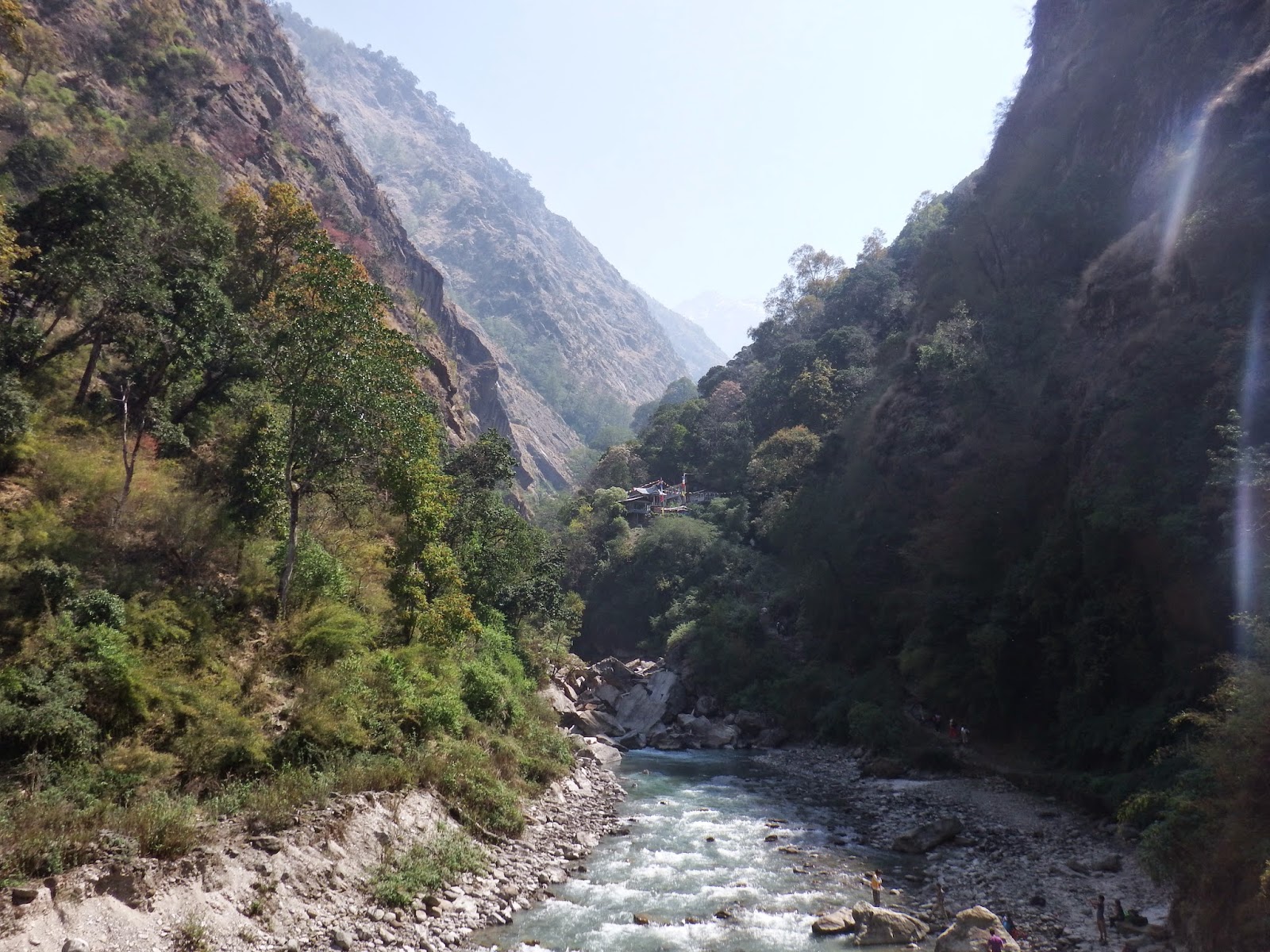 I have ended up a bit ahead of the rest of the group and come across a cluster of teahouses the first of which is called the Lama Hotel so I take my pack off and start talking to an Aussie chap who is trying to get a cold beer from the teahouse. 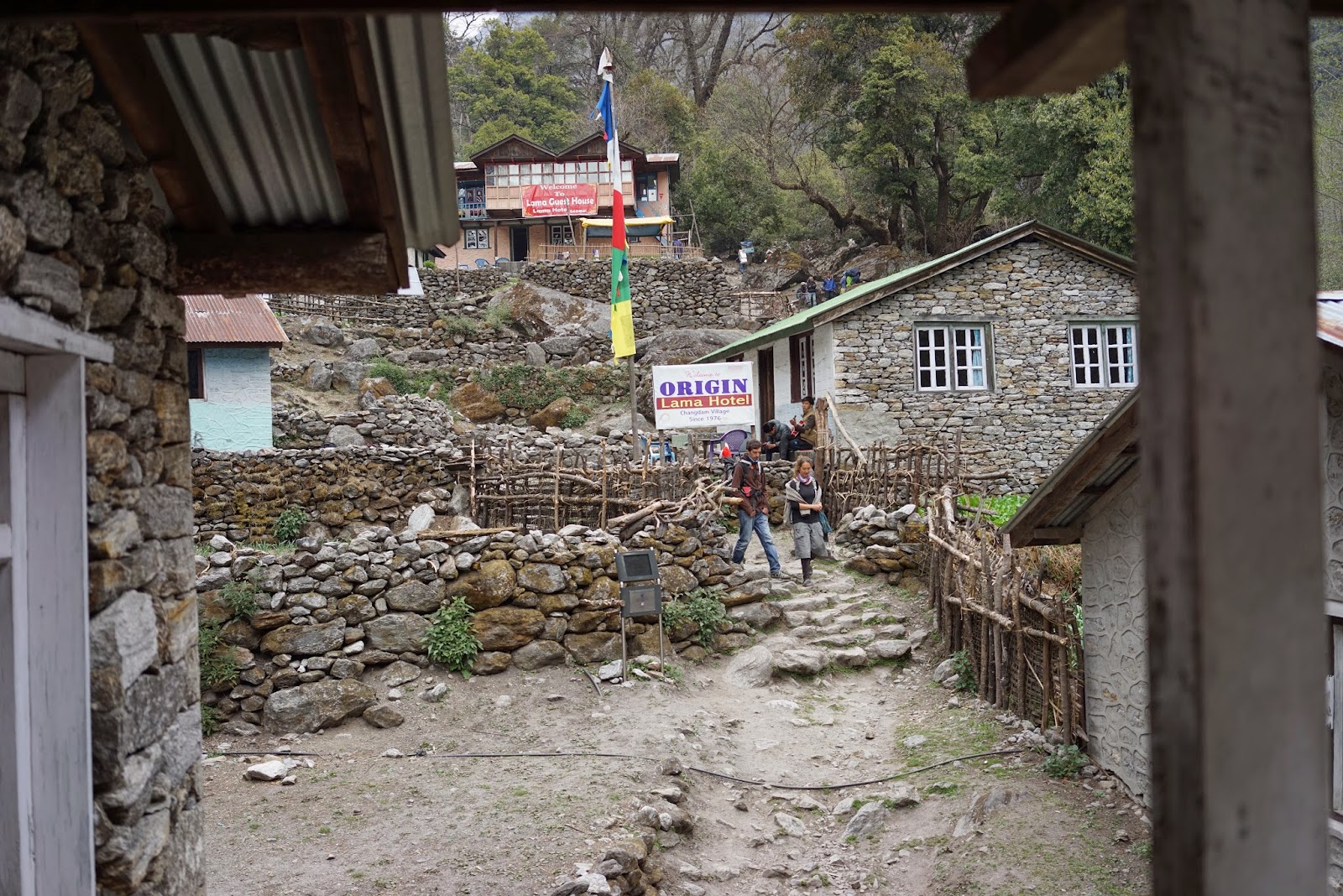 Whilst chatting, I glance at another teahouse and see that it is also called Lama Hotel, and then another - this is most confusing! I ask the lady running the teahouse which is the Lama Hotel and she says here. I then ask pointing to the next one if that is the Lama Hotel; yes, she says. Same, same teahouse I ask; no, she responds. That one (pointing to the next building up) Lama Hotel, I ask. Yes, she says smiling. I give up trying to work this out, smile and say thank you and continue chatting to the other trekkers who have found the whole thing highly amusing. A bit later on, the rest of the group arrives and we go to the next building up - it turns out that for some reason the whole area is called Lama Hotel - and all the teahouses have almost identical names.

Still energised by an excellent first day on the trail we head out for a beer with the people I was talking to earlier. A beer unsurprisingly turns into several until it gets too cold to stay outside which coincides with supper being ready. We do become the centre of attention over supper as the rather more than planned beers have their usual impact. After supper we have an initial discussion about altitude sickness which I can't say was necessarily treated with the right degree of seriousness by all of us.

We will be eating at the various tea houses along the way and the food is pretty much the same in all of them - the valley is vegetarian so there is no meat, but tinned tuna will be available intermittently. The food is pretty hearty up here and will consist roughly of:

There are a few steeper bits on the trek today as we start to rise up the valley. There isn't much to see as we are still walking amongst the trees. This is a much less busy route than the trek up the Khumbu valley towards Everest Base Camp and as such is in many ways a better one. 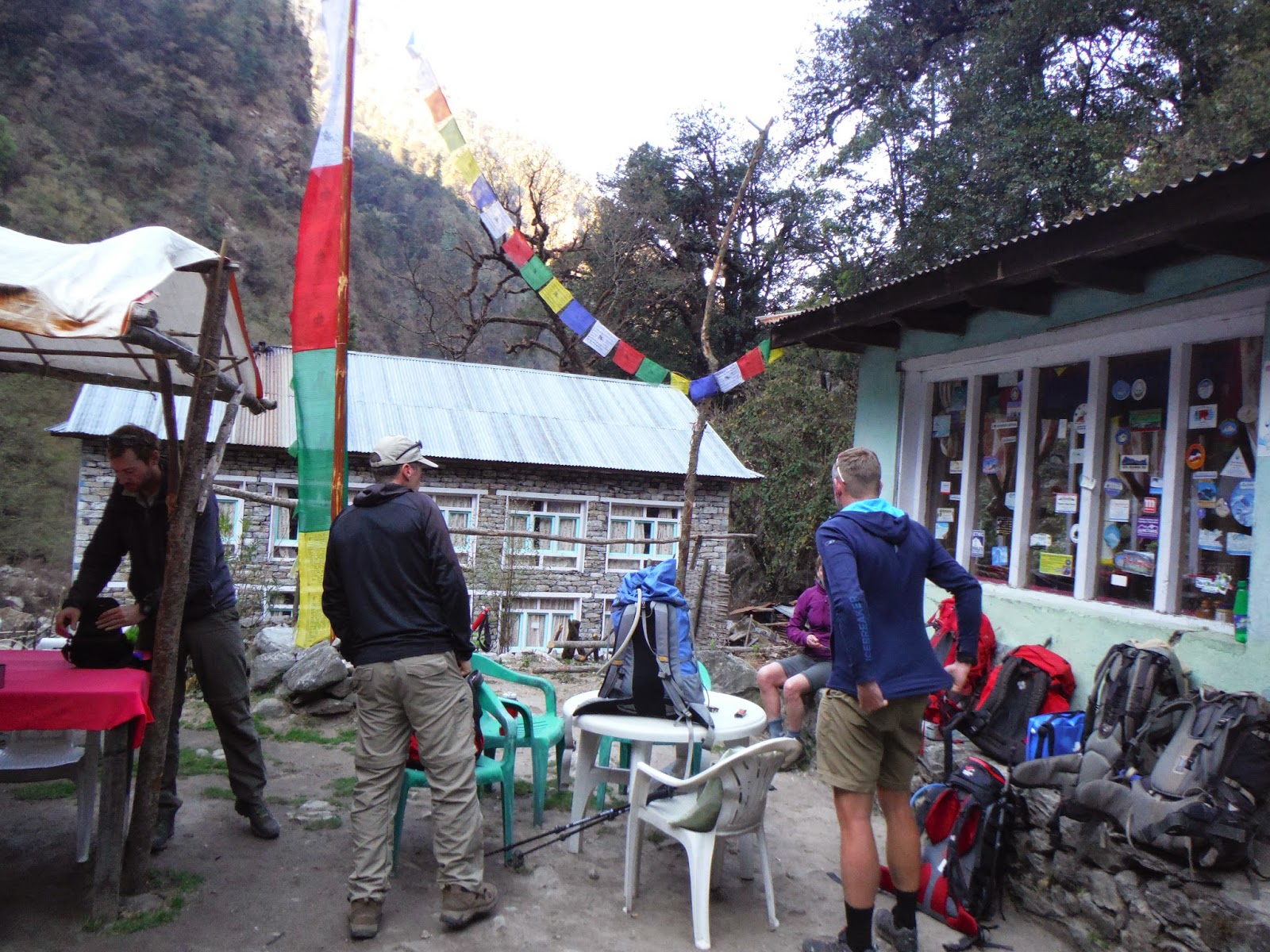 Preparing to set off in the morning 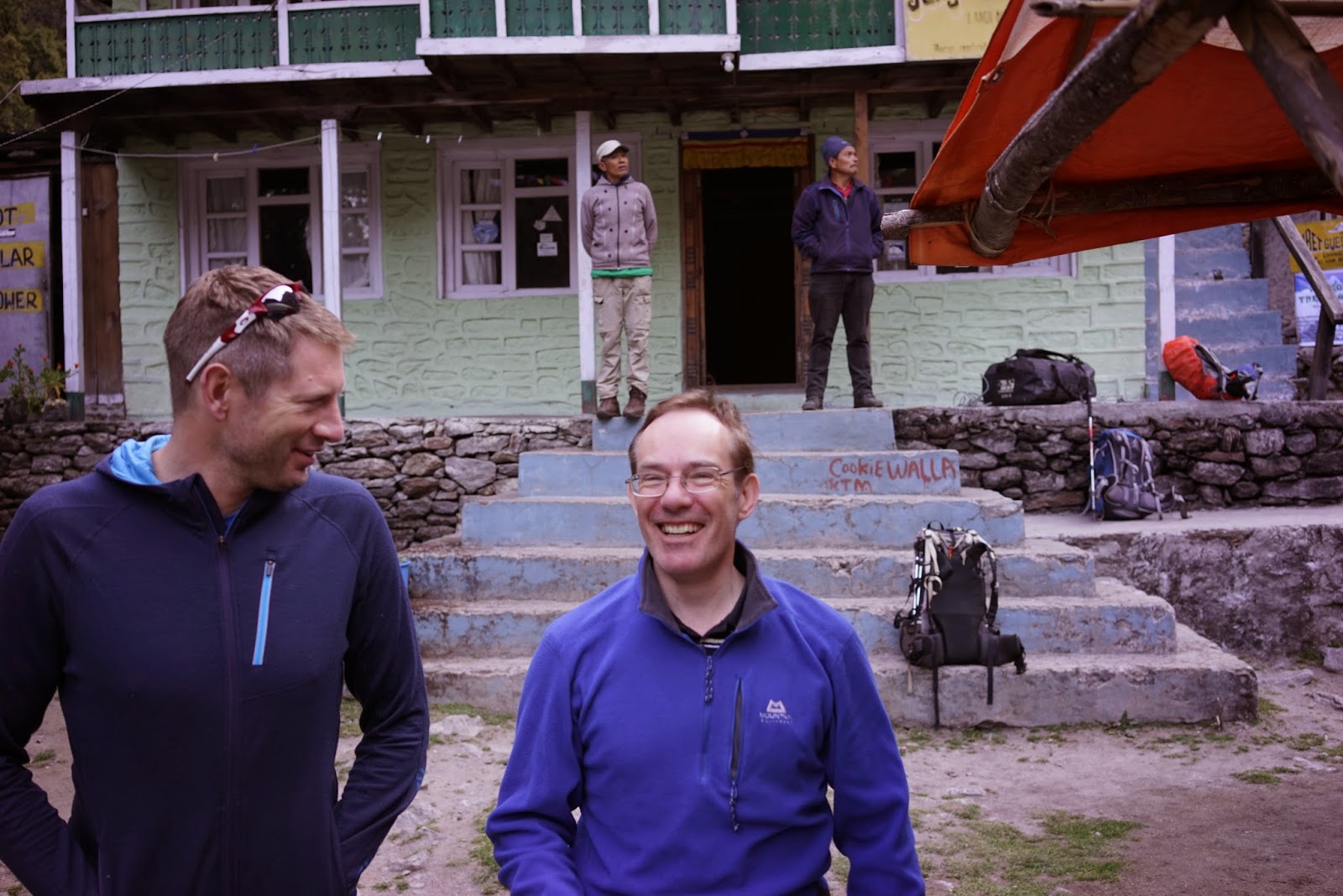 With Mark -clearly an amusing joke 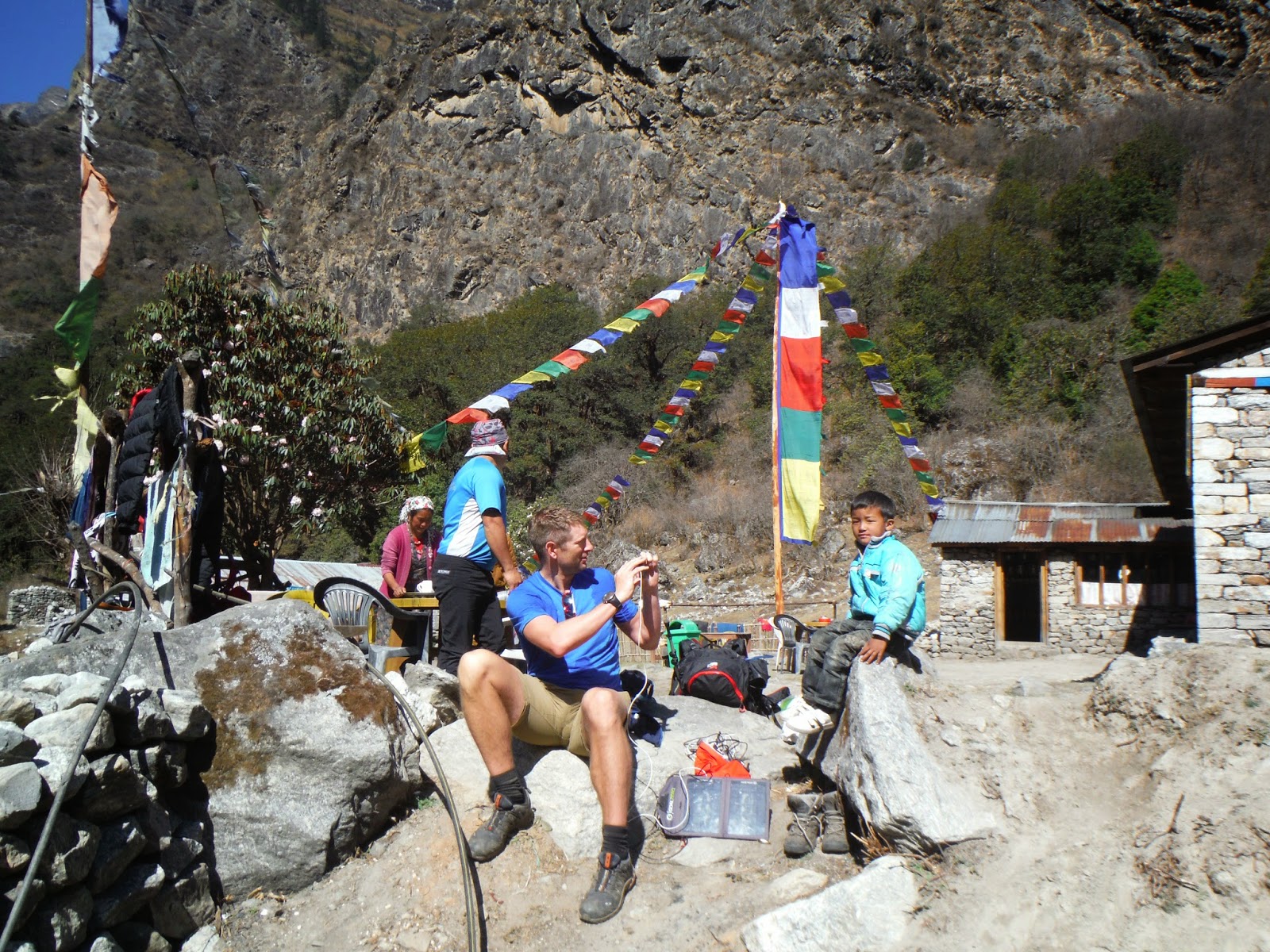 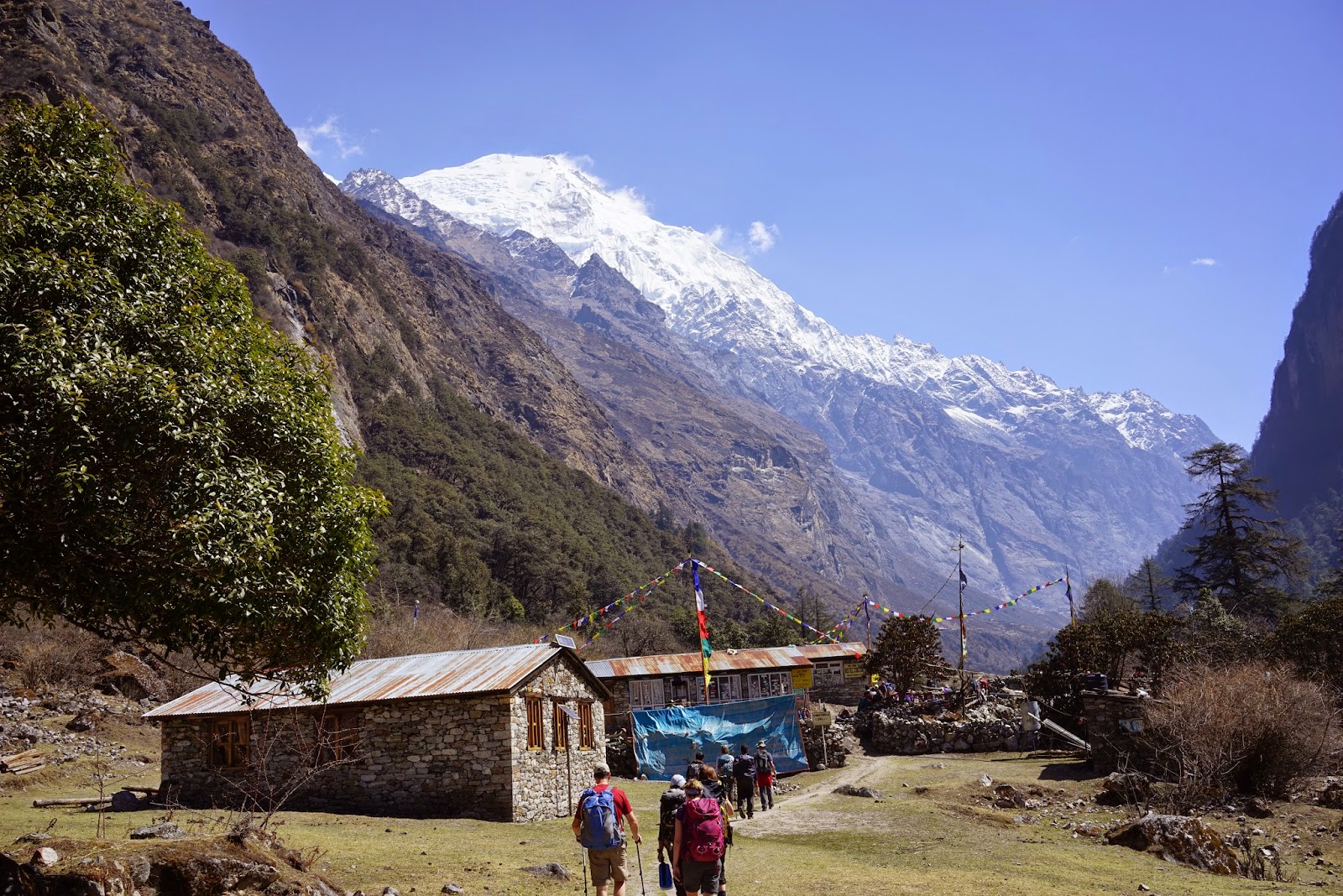 View up the valley 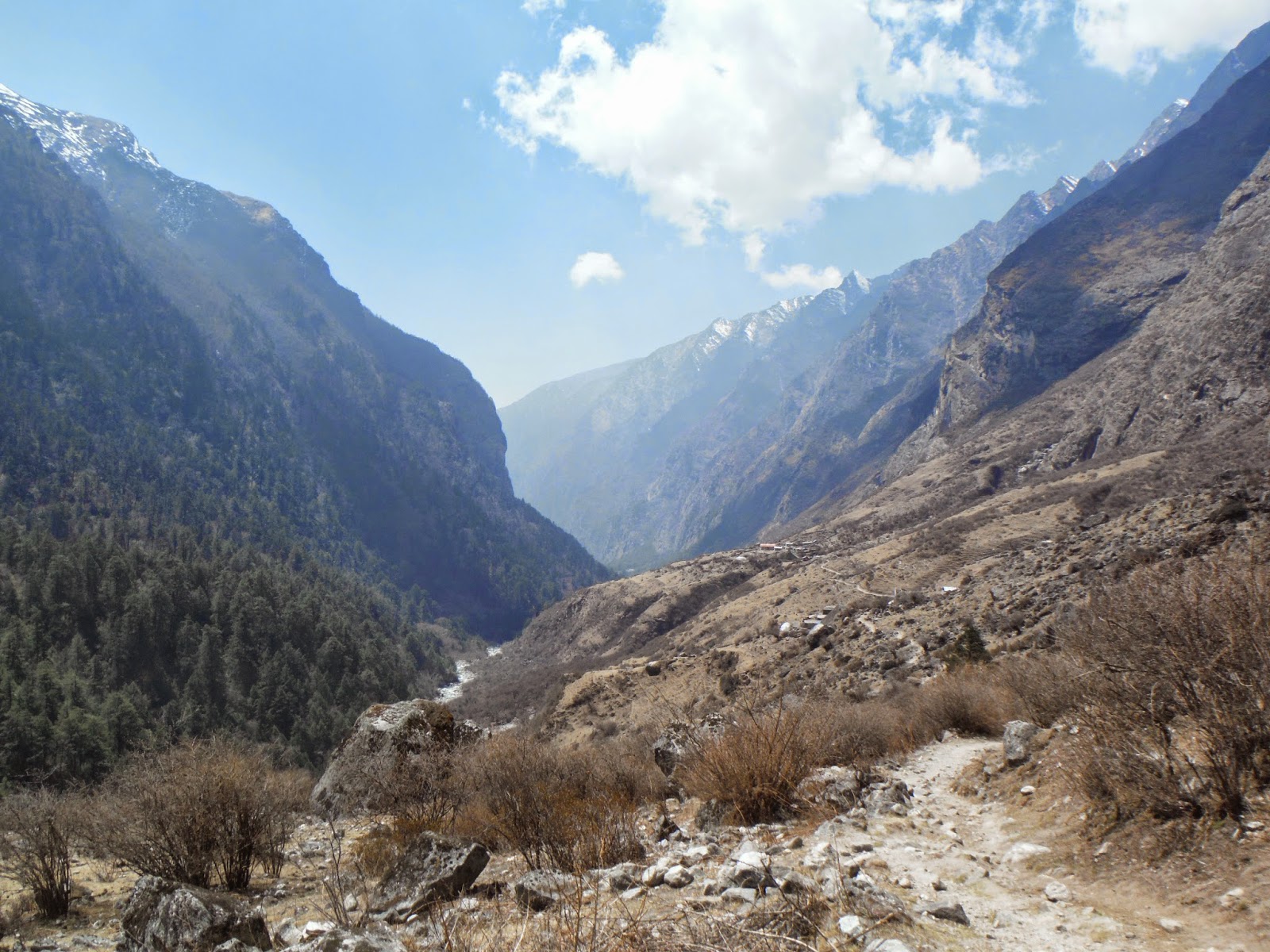 And back down the valley

We start off as usual in good sunshine and the route is mostly a pretty gentle gradient which brings us to the end of the treeline and the valley has become much more barren and rocky. 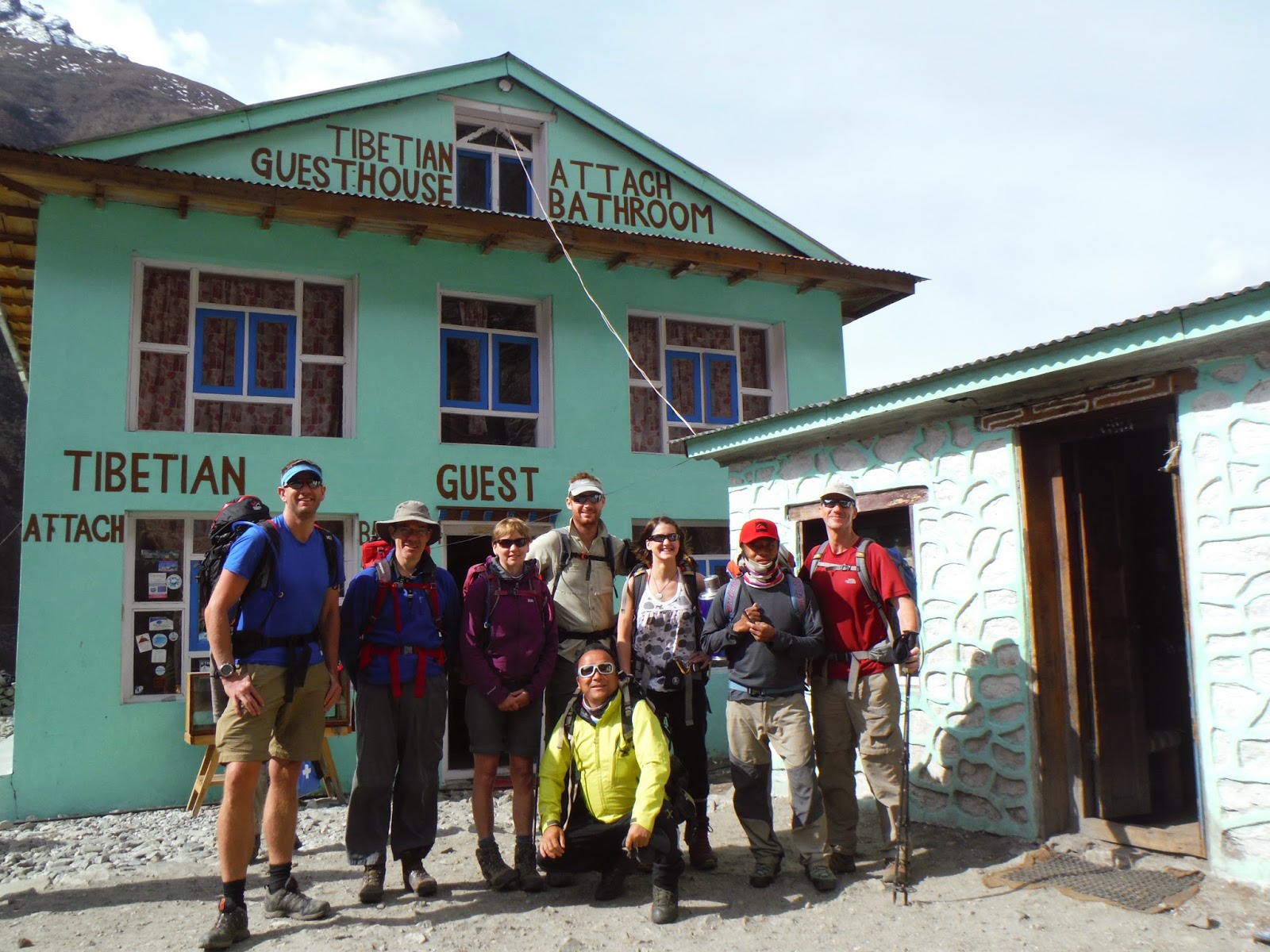 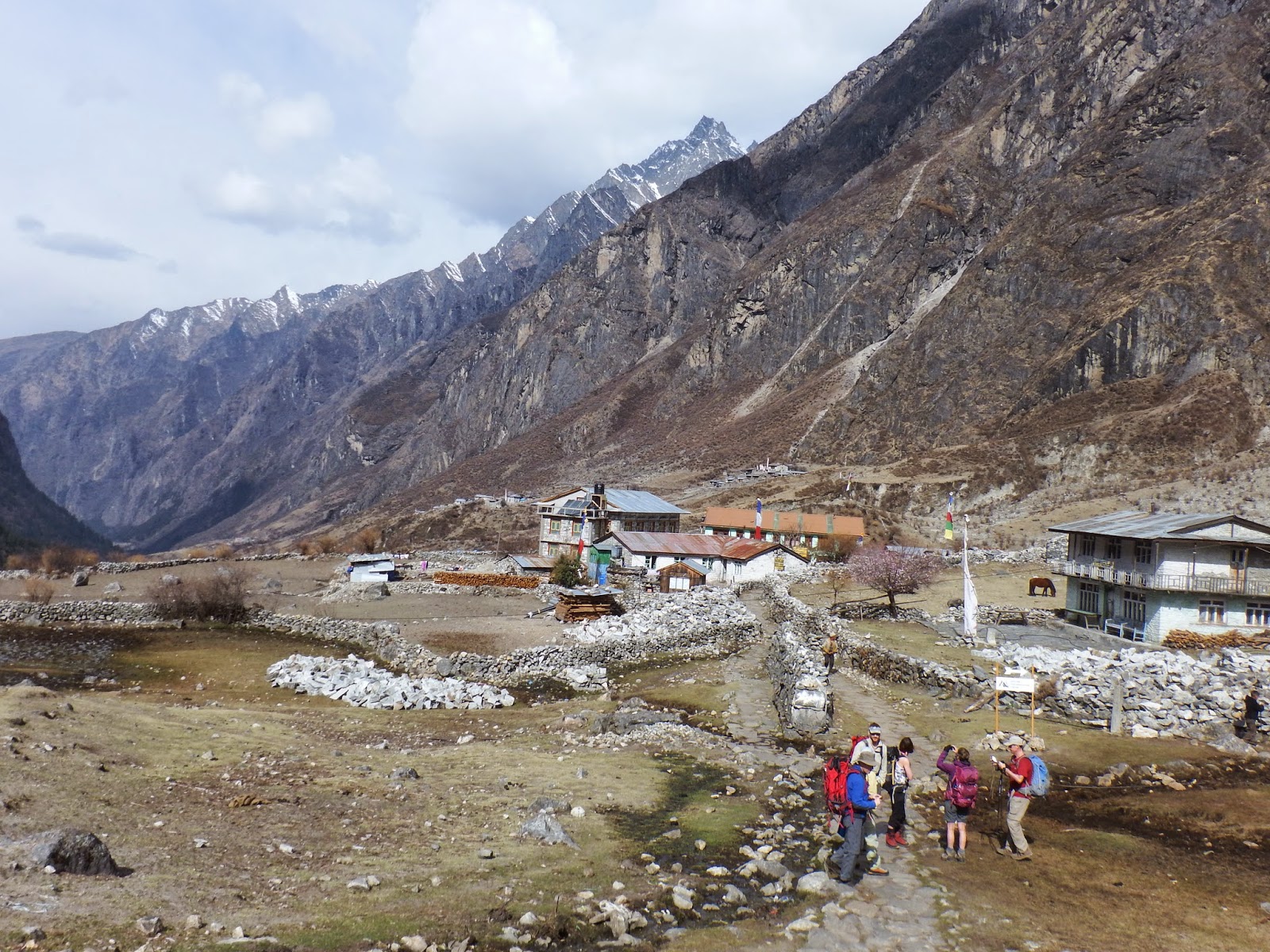 By about 10 it starts to get very windy and a low cloud settles in so we take refuge at a little hut whilst the group recombines. After a quick hot lemon tea, we set off for KG only to get caught in a snow storm as we arrive. The rest of the day is spent in the common room - chatting, reading, tea, supper etc. 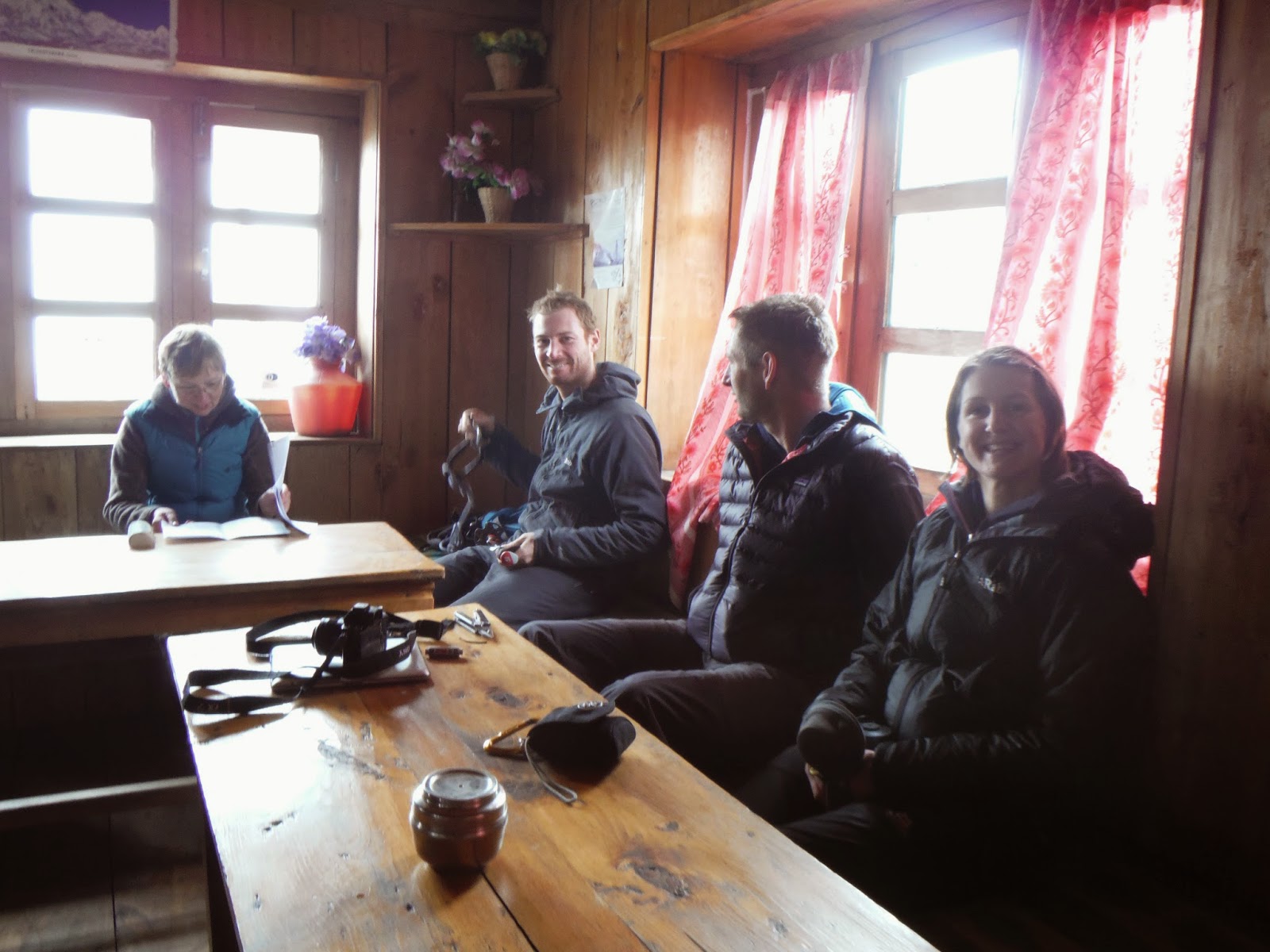 The weather in the afternoon remains pretty poor with quite a bit of snow falling which raises a bit of concern for our summit tomorrow. This is heightened when people arrive back from the trek with a range of horror stories about the weather and the conditions on the mountain - but it’s a fairly easy walk so we should be able to cope with it.

Today we are doing our acclimatisation trek for this section. The peak is pretty popular as it is a reasonable challenge and has a great view of the higher mountains surrounding it. We are very lucky with the weather with clear blue sky replacing yesterday's snow storm. The trek is fairly straightforward, but also a great mix of scrambling over rocks and moving over snow and ice. 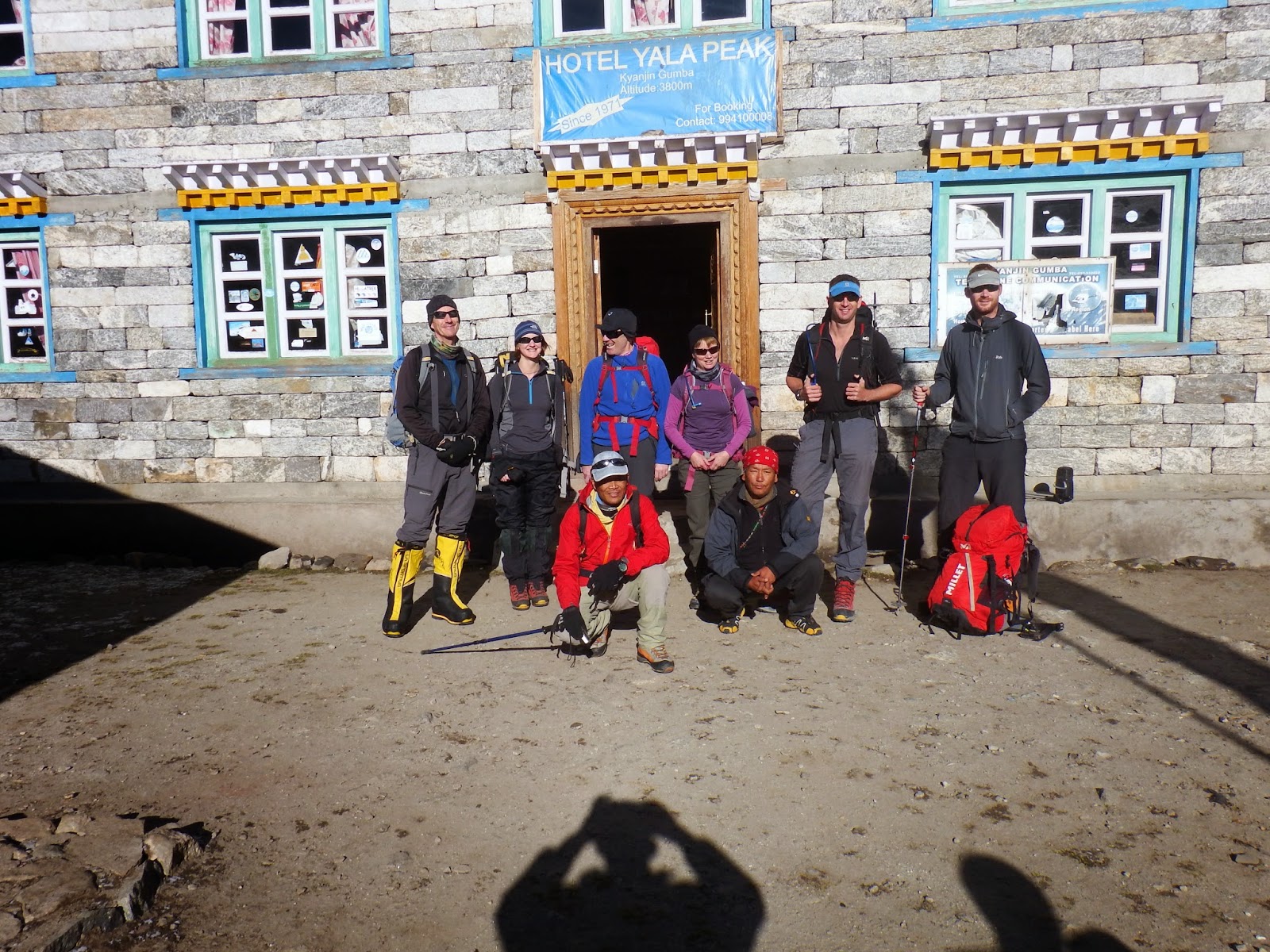 The team about to set off

After walking up the valley for a bit we head up the spine of the mountain until we hit the snow line ridge that leads up to the summit. As we gain altitude we lose protection from the wind provided by the surrounding mountains and take shelter in a small depression whilst waiting for the rest of the group to catch up. As we are now in the snow, the strong sun is reflecting from all around us so a chance to rest in the shade is very welcome. 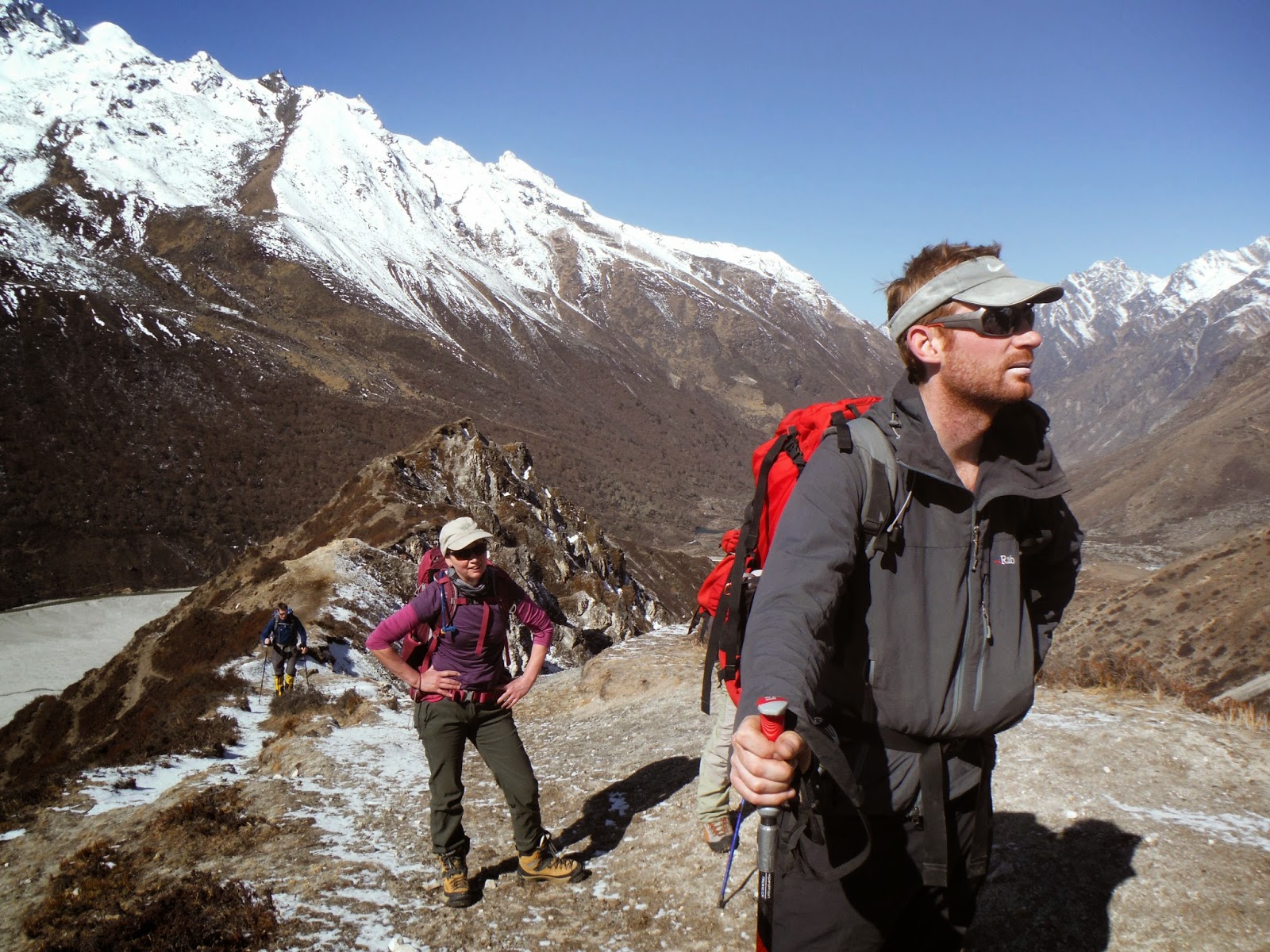 Spine up from the valley with Gus in the foreground 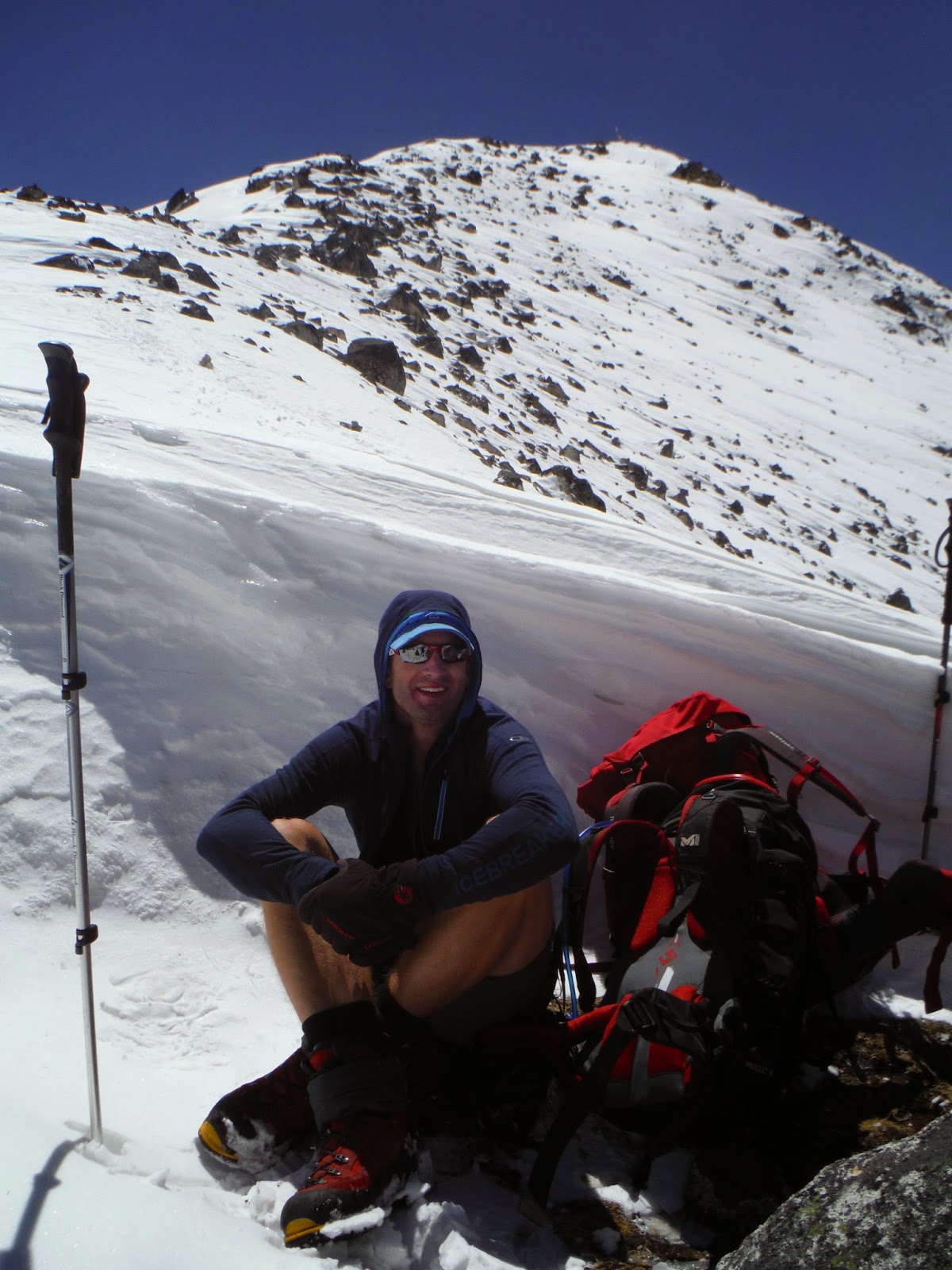 Not far to the summit 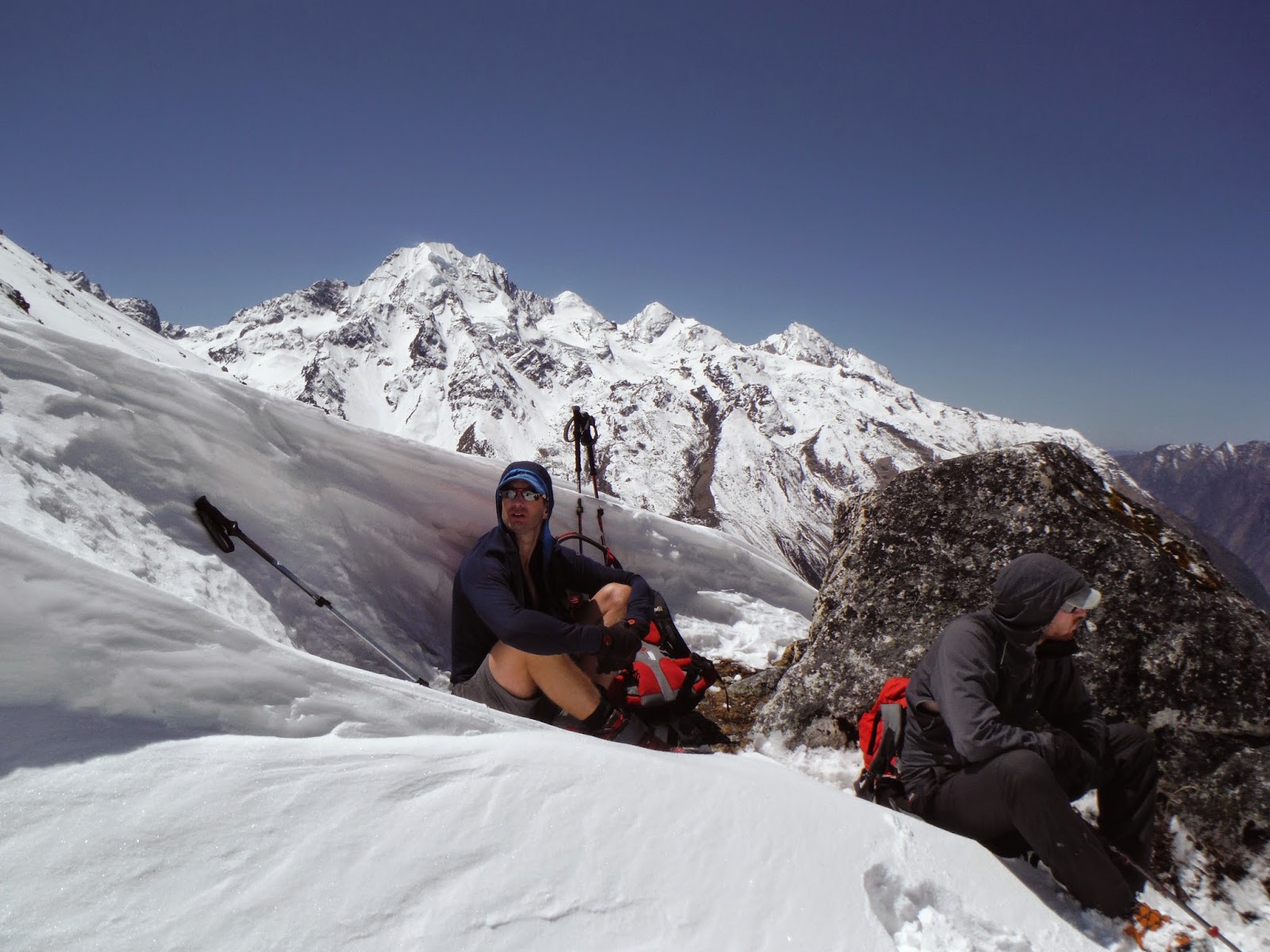 We stay at the top for about 45 mins to have lunch and help with our acclimatisation. 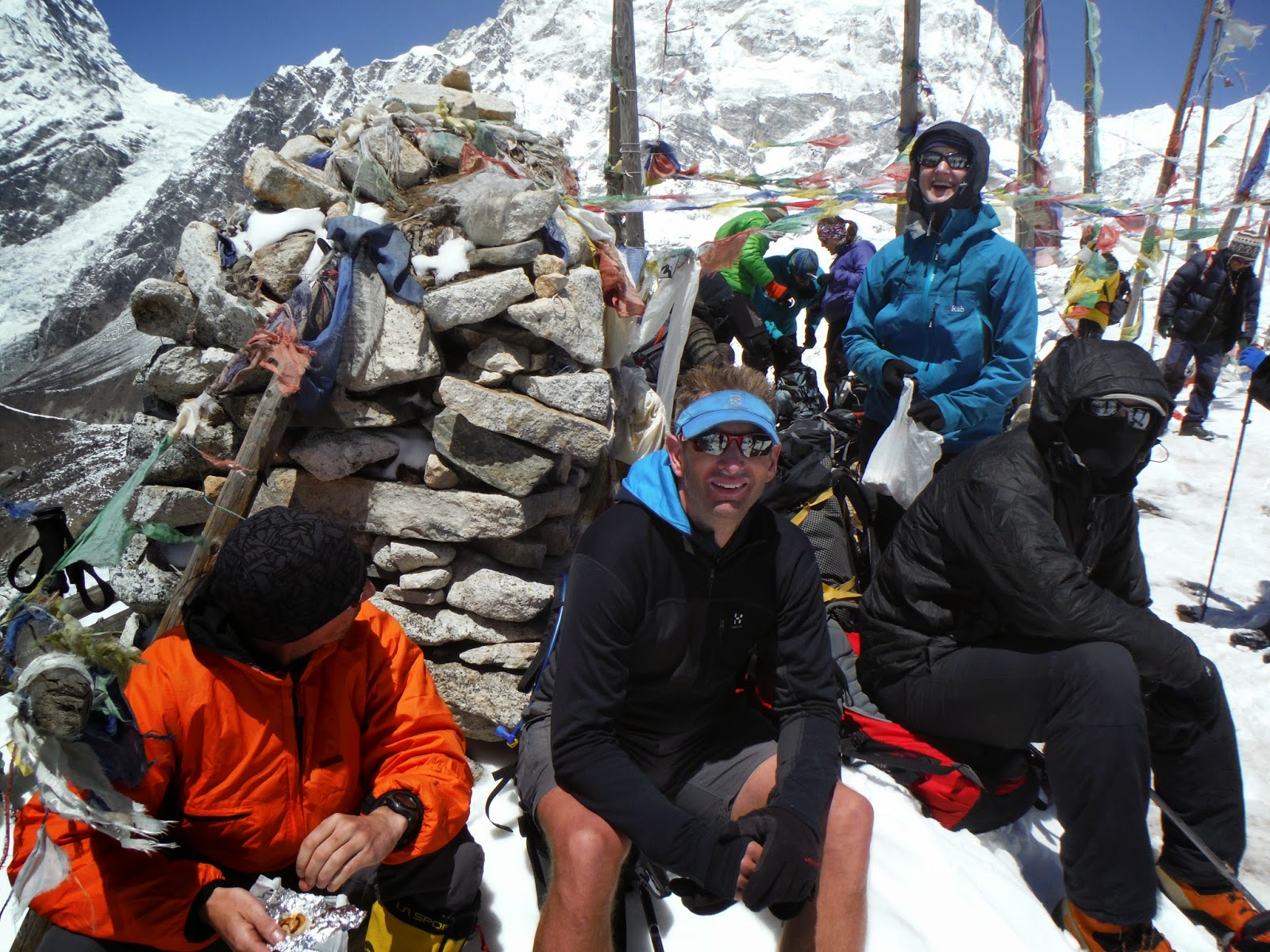 Lunch at the summit 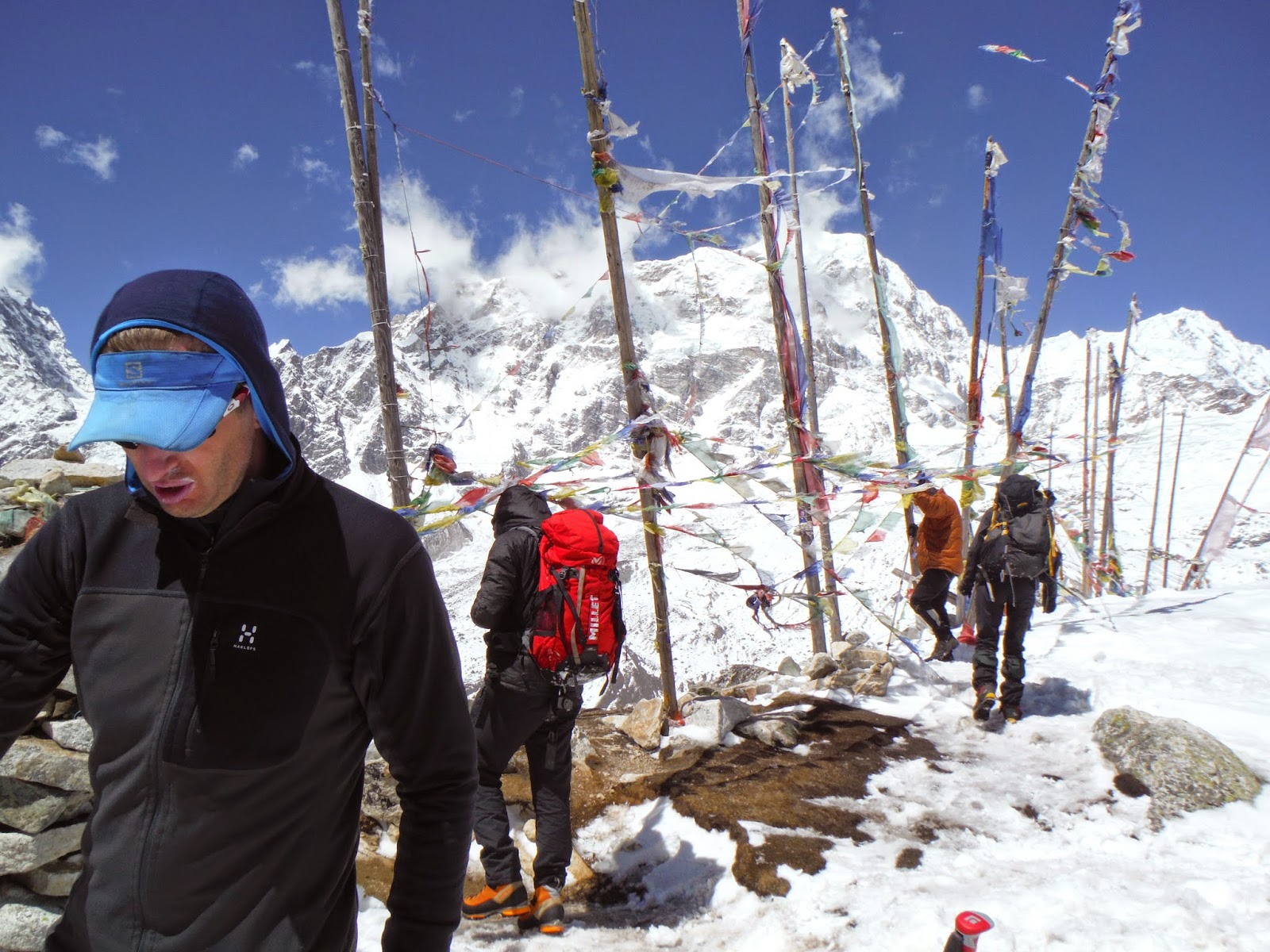 Prayer flag arrangement on the summit 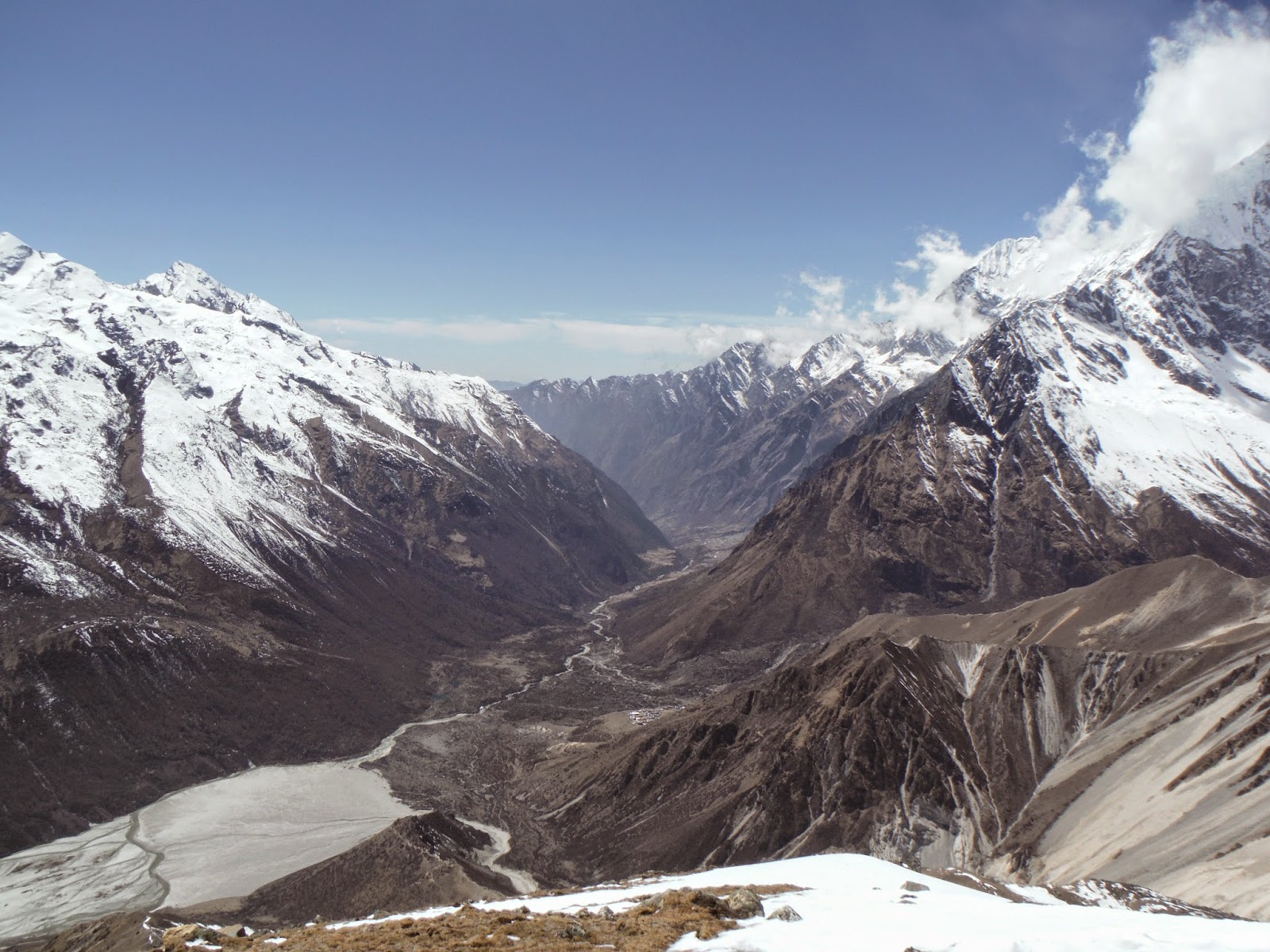 View back down to the valley 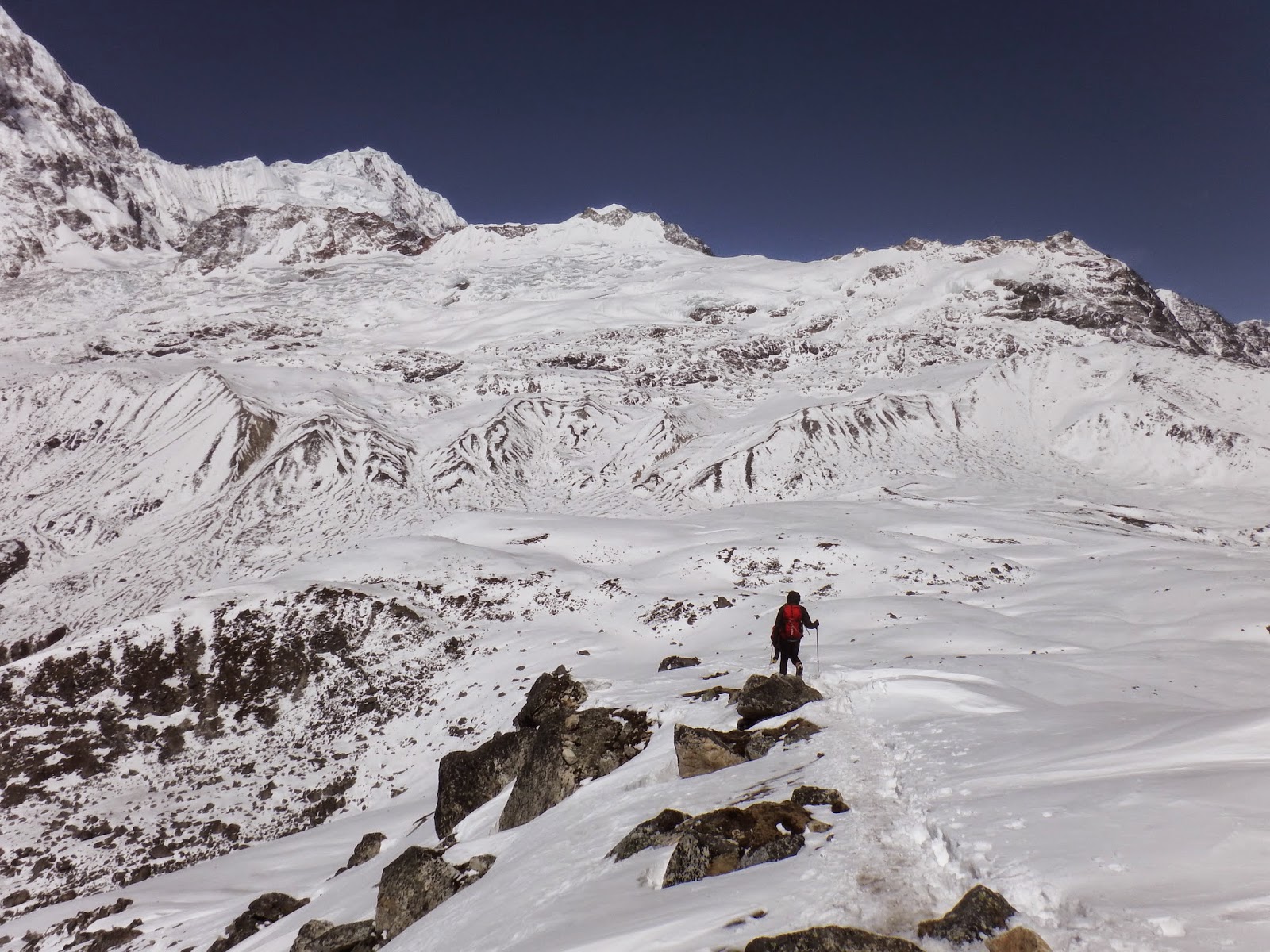 On the way back down we come across a group of Japanese tourists who are riddled with altitude sickness. We offer to help, but the group leader politely declines, saying that they are fine. It doesn't really look it, as one man can barely stand so a couple of us hang back for a bit to make sure that he does not deteriorate significantly. Soon he is hauled to his feet and a couple of small Nepalese boys take him down the mountain. One gets the feeling that they do this quite often as they are pretty competent and laughing and joking as they move.

We get back down for mid afternoon and have tea and biscuits as the sun slowly descends behind the neighbouring mountains. 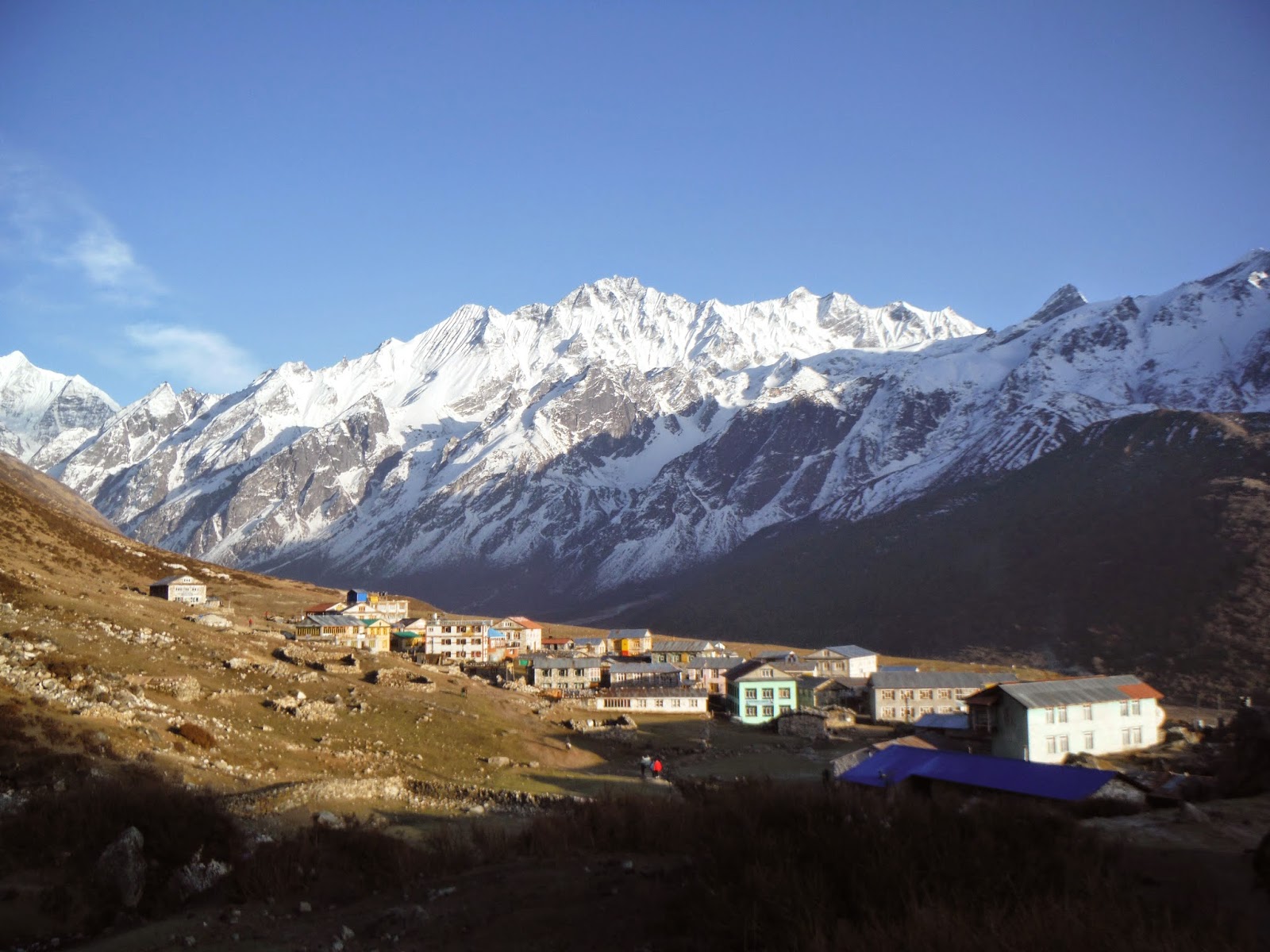 There is a change to the itinerary to help some people recover from the trek and instead of heading up to BC today we are going to have a rest day here. Flushed with our summit success today and given the rest day tomorrow, we stay up a bit later than normal playing some rather boisterous card games.