Whilst I can't say that I feel bad in the morning, I don't feel great either. Added to which, my backpack is petty heavy - camping at over 7,000 mtrs is no laughing matter! I am probably carrying about 25kgs which is probably not very sensible for the first time that I am going to such an altitude but we'll see. Nothing like getting your excuses in early!  I am taking up my mountain food and quite a lot of other equipment to leave up there so that I have a lighter pack for future rotations when I will be doing a lot more when I get up there! Not perhaps the most sensible, but at least I will then know that it is done and mean that I will be able to cope with the trip if I am weakened for some reason.

The route to the North Col is a surprisingly long trek along the glacier which takes us about 2 hours and then ascending the very steep headwall which takes us 3:40. I am not sure how to do this justice in words but just imagine a nearly sheer 500m face of ice and snow - not quite the wall in Game of Thrones but in that direction but we are doing it at 7,000m rather than just off ground level! This is a new altitude record for me - I have not topped 7k before!

This was one of the hardest sections I have done in this series of expeditions - although I imagine that we could have made things far easier for ourselves by having more breaks and next time I will be doing it with a much lighter load and be more acclimatised. 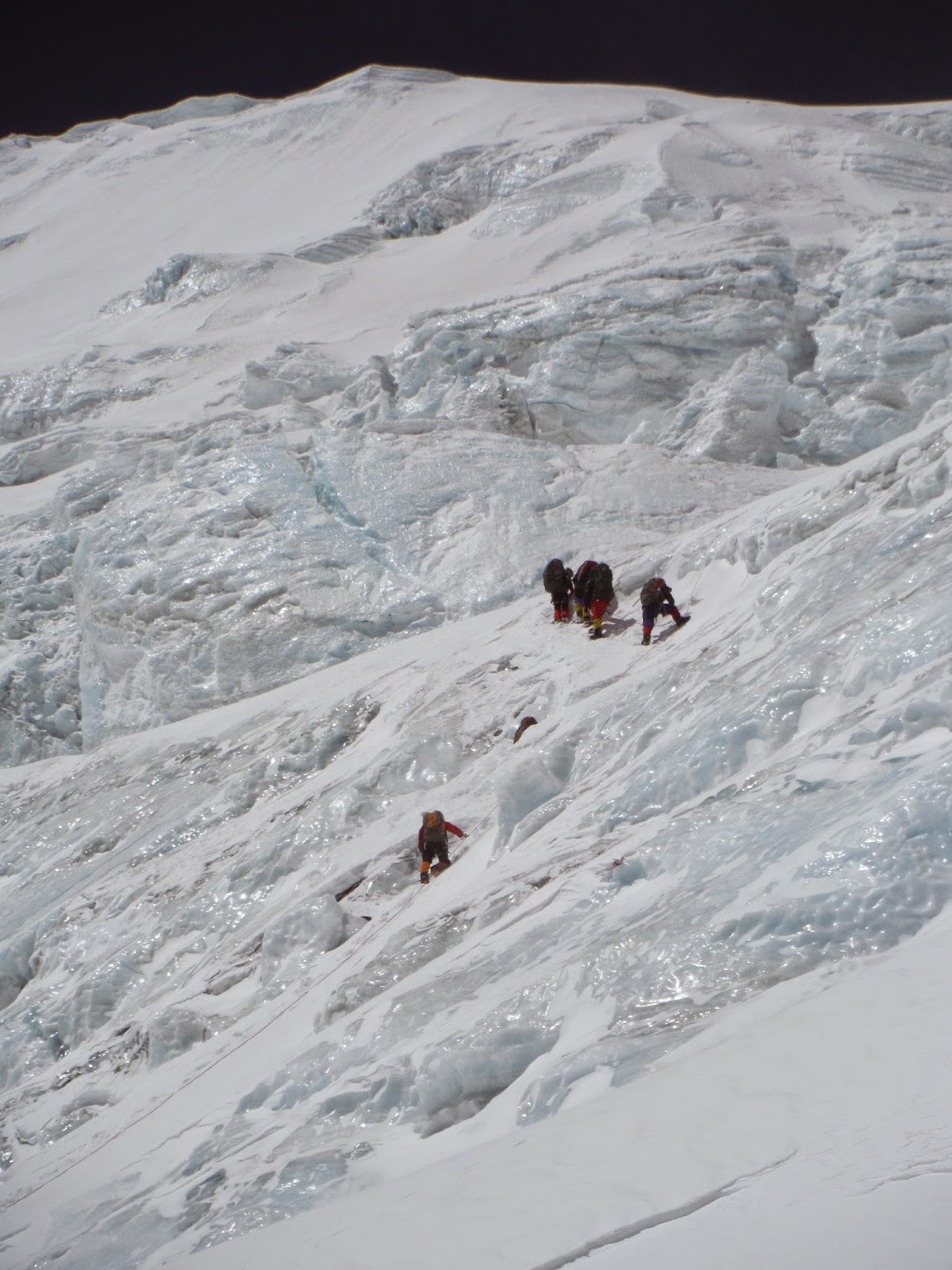 View up the headwall to the North Col 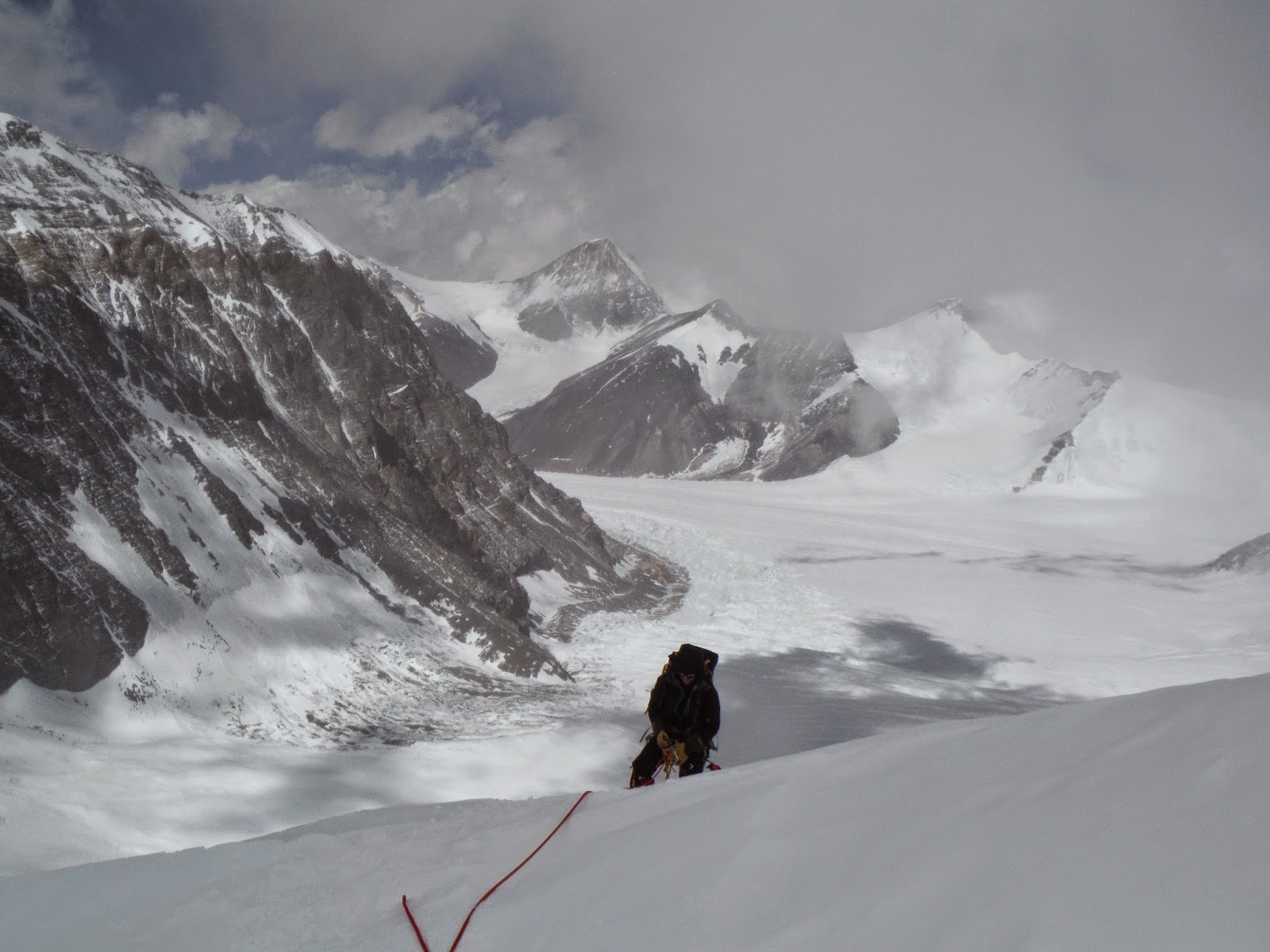 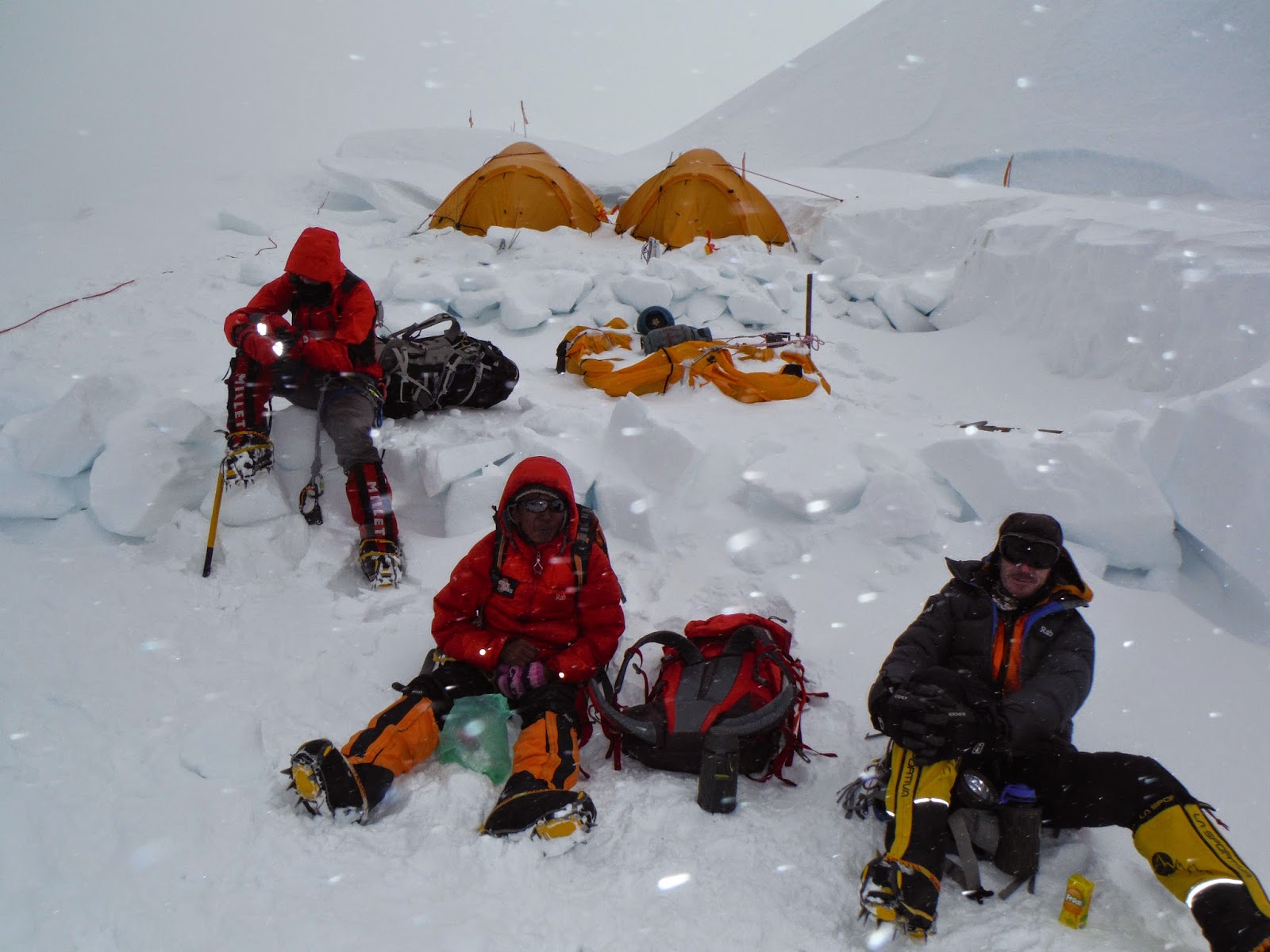 Having a rest at the top - not the best conditions really 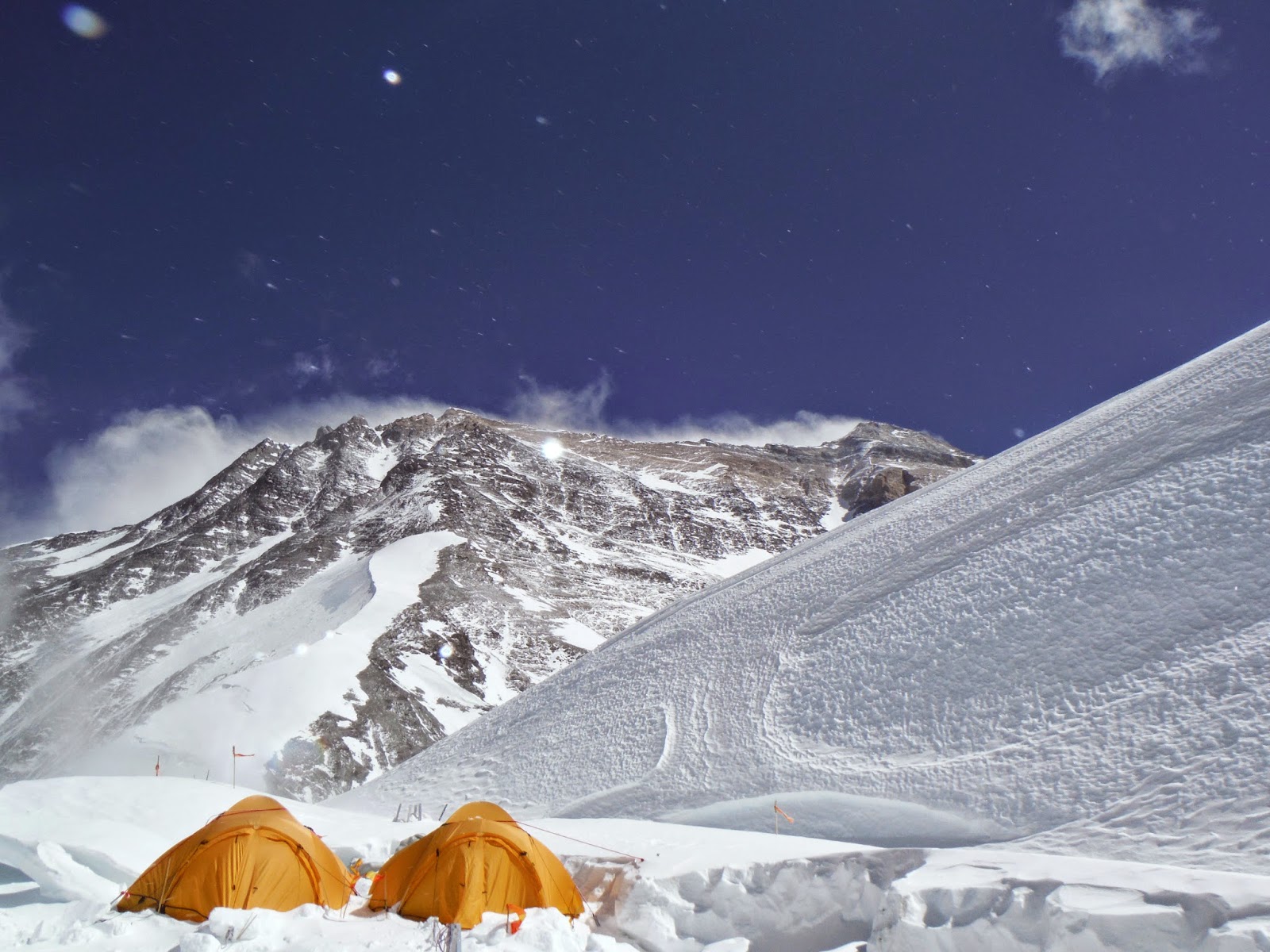 I am actually pretty glad that I am staying up here for the night on my accelerated acclimatisation schedule as I feel really rather drained. The others are heading back down to ABC for the night and I will then catch them up somewhere on the way back to BC tomorrow.

Our tents are in fact a short walk along the ridge towards the flags that can be seen on the left hand side in the above photograph. As can be seen in the photo, the protective mound to the right soon comes to an end and so our tents are going to be continually exposed to the wind coming down the valley. Quite why we are camping here is not that clear and even more concerning as we had to use our spare guy ropes for the tents at Base Camp.

The rest of the afternoon / evening is meant to be a relaxing one in the tent recovering, eating, sleeping etc. But the self deflating issue that I had when I first bought my sleeping mat seems to have reoccurred (I have not had it since and it has chosen a fine time to reappear) so I have a pretty miserable evening and night trying to remain warm and comfortable on the very hard and angular ice. The fact that I am having altitude impacted, bizarre dreams really doesn't help either as there are now three factors vying to keep me awake at any given moment.

We are using an older brand of freeze dried food as unfortunately Fuzion went into administration - this food is not nearly as good and even slightly too much water has a real impact on the appeal of the food. When you are already struggling with a loss of appetite at altitude this can be very serious as a day, and therefore a summit attempt, can be ruined by one day with no energy. These packs do however contain more energy than the Fuzion ones - 800 cal vs 500 cal - which is a real bonus if you do eat all the food.

It is pretty chilly in the morning despite the fact that as we are up high we do get direct sunlight early on. Packet breakfasts are as bad as I remember them - think cheap, sugary, ready brek derivative breakfasts from the 80s / 90s. After packing I have a quick call with ABC at 8am to confirm that all is ok and that I am heading down shortly for the group return to BC.

The descent is an absolute joy with the 4 hour real trudge up the face turning into a 30 min hop, skip and a jump (so to speak) down the face with the only issues being the necessity to come off the ropes to get round people coming up. I started off being conservative and waiting at anchors to move past people but soon got bored of this and just moved past them (safelyish) wherever I came across them. Then back across the lower glacier and the moraine for an hour back to camp.

When back at ABC, I had a bit of reorganising (as always) to do before heading on down after the rest of the group who had set off earlier. This trek back to BC as on the way up was a real schlep and exacerbated by my lack of sleep and the occasional snow shower. I ended up taking almost 6 hours and was the last person coming down the mountain - slightly nerve racking whilst on some of the slippier areas! 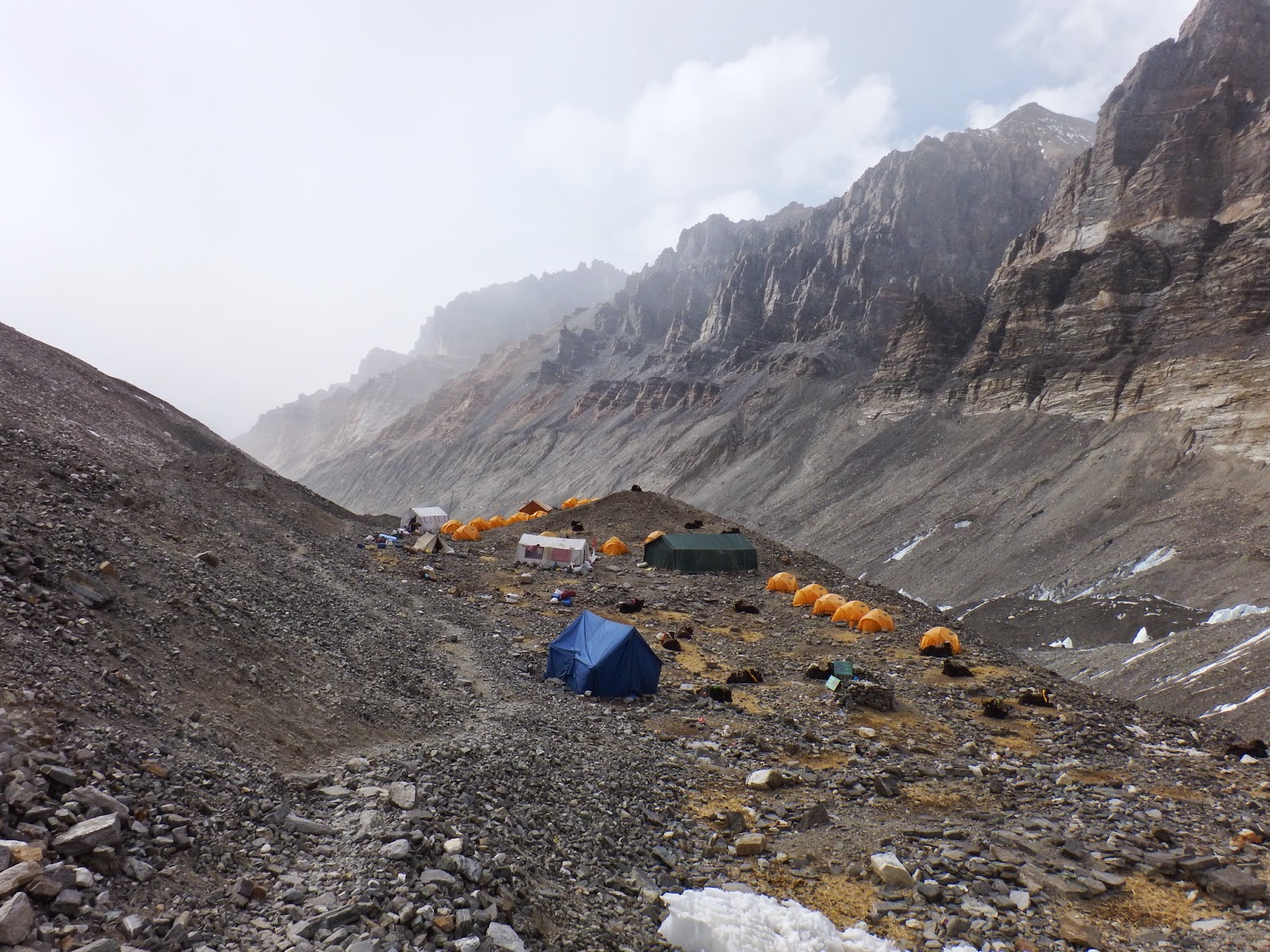 Passing through interim camp on the way back to BC

This got me back just in time for some excellent hot soup and dinner and a chance to meet the Lhapka Rhi team who have just arrived at base camp - Lhapka Rhi is the summit just to the side of ABC and about the same height as the North Col. This group will be doing both of these before heading back to Kathmandu and it is good for morale to have another group of people out here.

We pretty much all head to bed early after supper - it's been a long day!

The name says it all really - chatting, reading, sleeping. The highlight was our first shower in a week - I think I'll leave my washing for another day though.

It turns out that the Lhapka Ri group hasn't been able to bring out everything that we needed - the key item being the radio transmitter. I don't fully understand what is wrong with the one that they have brought out but it is not going to work properly if at all. I decide not to push the point here as the ultimate end of any such conversation is that since we don't have the required safety systems in place we can't go up the mountain and so would have to come back another year and argue over who pays for everything. I just hope that we don't end up needing the radios as they are a pretty key part of the infrastructure for a safe climb of a big mountain!

We start to get more of an idea of what has been going on the South Side in the aftermath of the avalanche there. It is not quite clear why, but Maoists seem to have seized this opportunity for their own political agenda and made death threats to any Sherpa or their family that continues to work thereby forcing them all to leave the mountain and bringing an end to the season for everyone. The real losers here being the normal Nepalis and their families who will not now receive their main income of the year which they hugely depend on to advance the political careers of militant quasi trades unionists.

More of the same really. A couple of people do some washing but then the clouds come in which make it miserable to do the washing and then impossible to dry it so I decide to leave it for a bit.

The afternoon is spent playing cards and waiting for the weather update to confirm or change our plan to rest tomorrow and head up the day after. We finally get the weather at about 7 or 8 pm and luckily (given we have not yet made any real preparations for tomorrow) the plan remains unchanged.

It is Gus' birthday today so we have some fun and games as well as a cake to celebrate!

I decide to make some progress with some more domestic chores - washing and trying to find out what is wrong with my mattress. One of our cooks seems happy to do my laundry for a few dollars and I identify the leak in one of the valves of my mattress in about a minute so simply glue the whole thing up. Jobs done in about 15 mins...

Days are resting, chatting eating and organising for the rest of the expedition. We talk a bit about future rotations up the mountain as well as go through the high altitude medication that we need to have with us at all times to prevent death from swellings (edemas) in the lungs or brain.

The Lhapka Ri team are heading up to intermediate camp today and then tomorrow we will all head up to ABC. Moving up for the first time means yaks which means a good couple of hours of haggling over weights, measurement and costs but by 11 they are off. 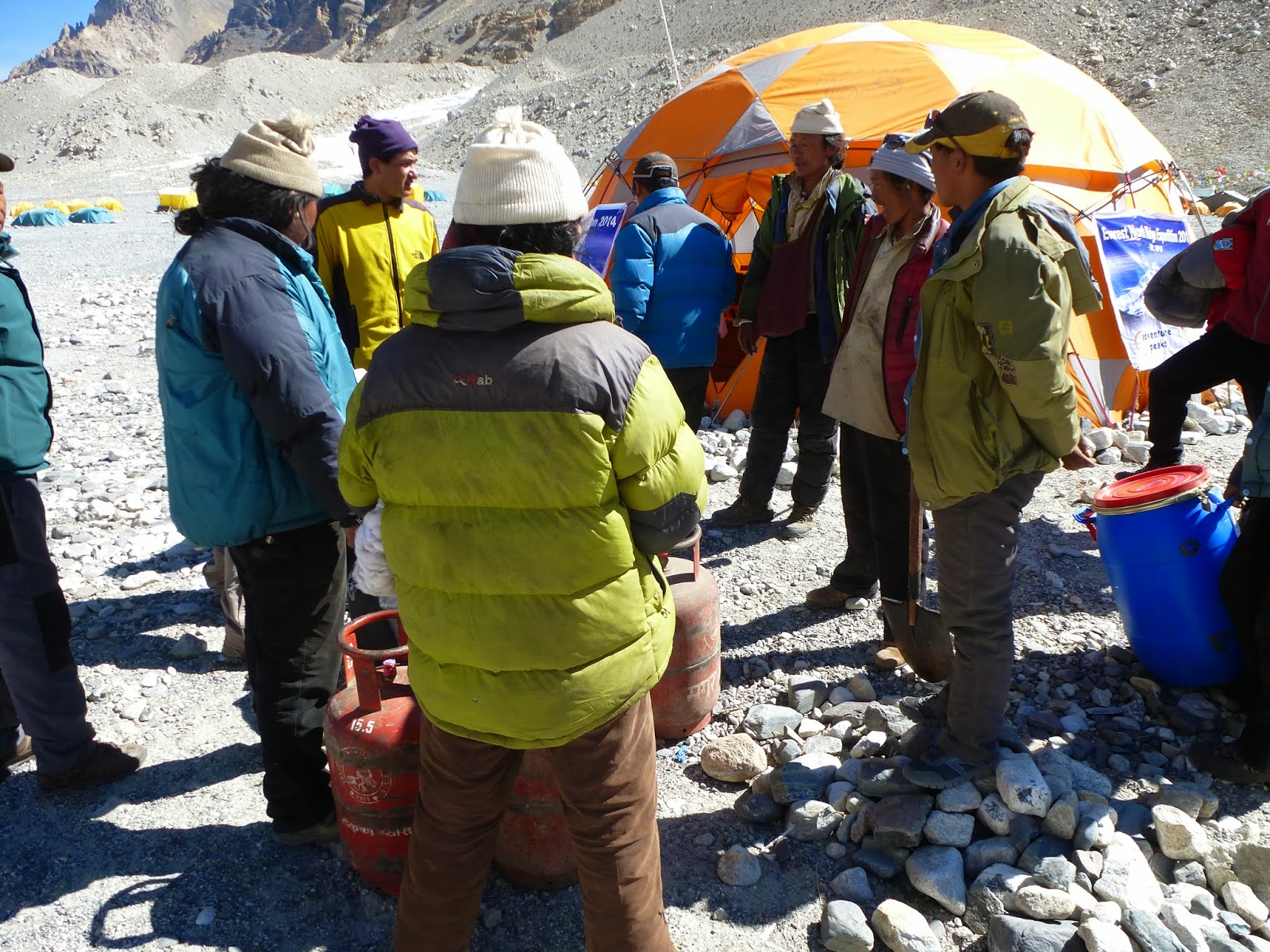 Yak herders having a discussion 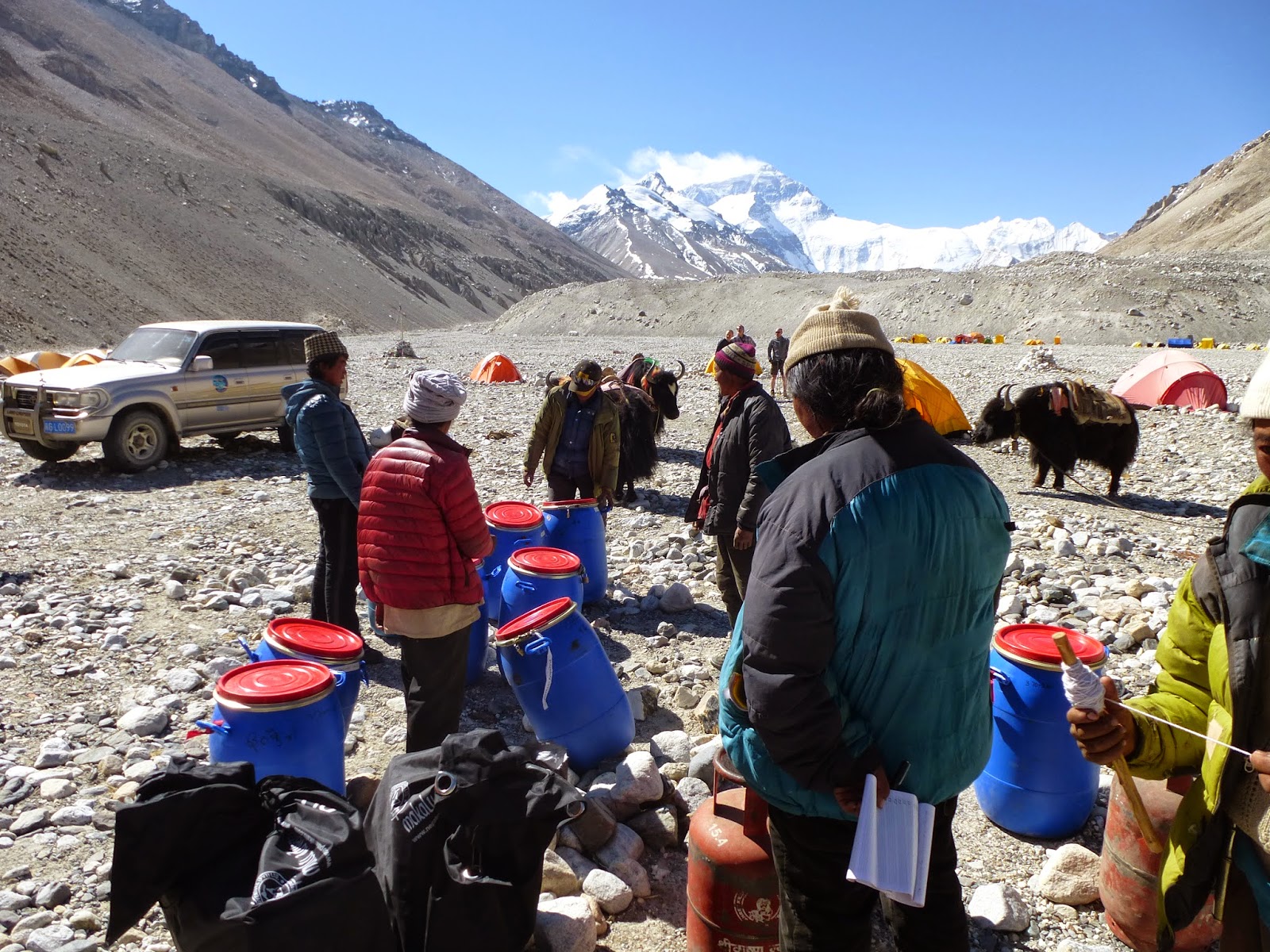 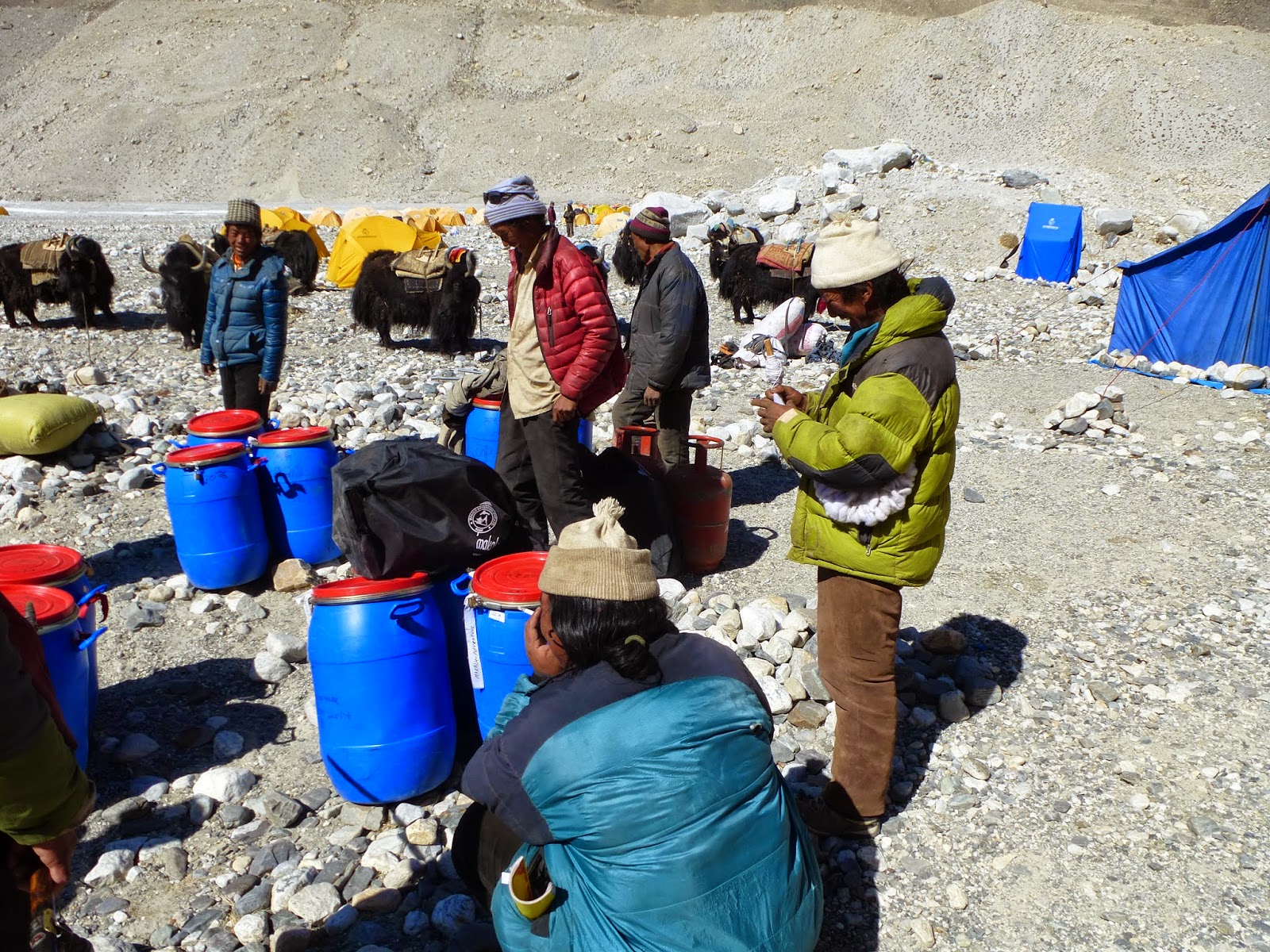 As we are heading up tomorrow, I have a quick wash and a shave and then head back to the mess tent where there seems an unusual amount of activity. The leader of the Lhapka Ri group (who has recently had two fits and hurt his knee) has had to stop on their way up to intermediate camp and so a few of us set off to go and pick him up as well as his bags which are being taken off the yaks. A few other bits and pieces get taken off the yaks so I make a bit of a sight walking back down the mountain!

When we get him back, we pack up his things as he is being taken back to Kathmandu and then sort ourselves out in preparation for heading up to ABC tomorrow. The weather is middling for the next few days while we are up on the mountain - there shouldn't be too much wind which is important but it does look as though there will be a bit of snow. The danger here is that the headwall up to the North Col could become avalanche prone if there is a lot of snow on it. From this far out and this far away it is not really possible to make a decision so we are just going to head up and take a look.